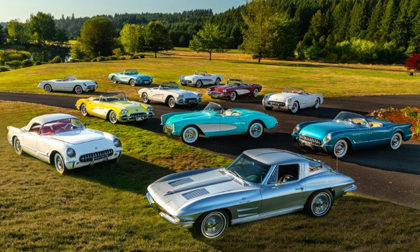 Las Vegas, Nevada – August 21, 2019 – Barrett-Jackson, The World’s Greatest Collector Car Auctions, will sell the Jim Osterman Collection of classic Corvettes during the 12th Annual Las Vegas Auction, October 3-5, 2019, at the Mandalay Bay Resort and Casino. Eleven examples of highly sought-after, matching numbers and NCRS Top Flight Corvettes from 1953 to 1963 will all cross the auction block at No Reserve.

“The Jim Osterman Collection includes some of today’s finest examples of classic Corvettes we’ve seen in one collection,” said Craig Jackson, chairman and CEO of Barrett-Jackson. “It’s rare for a collection of this caliber to be sold in its entirety, and we’re proud to have it as part of this year’s Las Vegas Auction. It’s especially exciting to see this collection consigned following the announcement of the new mid-engine C8 Corvette, when enthusiasm for America’s Sports Car is running high.”

Two original 1953 Corvettes will cross the block in Las Vegas with No Reserve. Chassis #105 (Lot #725), which features a custom-fabricated removable hardtop, underwent a frame-off restoration in 2018, including rebuilds of the engine, transmission and drivetrain. Since its restoration, it has won a NCRS Top Flight Award. Chassis #254 (Lot #735) also received a frame-off restoration in 2018 and retains its original side curtains and spare tire. This Corvette has been driven less than 50 miles since the restoration.

“Our Las Vegas Auction is a must-attend event if you’re a classic Corvette enthusiast,” said Steve Davis, president of Barrett-Jackson. “The Jim Osterman Collection represents countless years of research and hard work, resulting in one of the finest collections of C1 and C2 Corvettes on the market. This will be a rare opportunity to see all of these cars together before they find new homes.”

Also crossing the block is a 1955 Chevrolet Corvette 265/195 convertible (Lot #733). Number 93 of only 700 models produced in 1955, this rare Pennant Blue convertible was restored in 2017 and is a NCRS Top Flight Award-winner. A 1963 Chevrolet Corvette Split-Window Fuelie (Lot #734), the only C2 Corvette in the collection, was meticulously restored and documented by world-famous street-rod designer Boyd Coddington. The car is powered by a fuel-injected 327/360 V8 engine mated to a 4-speed manual transmission. Of the 10,594 coupes produced in 1963, only 2,610 of them were fitted with fuel-injection.

Other featured vehicles in the Jim Osterman Collection include:

For more information on becoming a bidder, purchase tickets or to consign a vehicle for the 2019 Las Vegas Auction, visit www.Barrett-Jackson.com.