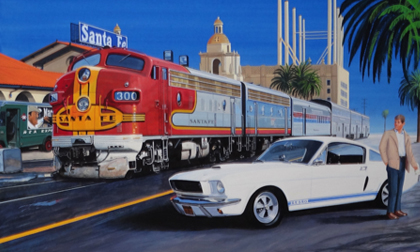 AFAS Artist Ken Eberts Stays On Track In Monterey With Shelby GT350, While Life’s (Still) A Beach In This ’39 Woody

CARMEL, Calif. – July 26, 2019 – Ken Eberts, an award-winning painter and founding member of the Automotive Fine Arts Society (AFAS), will display two of his award-winning original paintings at the group’s exhibit and reception at the New Masters Gallery in Carmel. The free exclusive car art show, entitled “Old Masters at the New Masters,” begins on Saturday, August 10th and continues through Sunday, August 18.

“Few cars packed the excitement onto an automotive footprint better than Shelby’s extensively modified Mustang,” said Eberts. “Virtually every aspect of the Ford was modified to meet Shelby’s personal requirements, as well as those of the SCCA’s competition committee. The result was a dominating track car and a star on the street.”

Taking a decidedly different path – or waterway – is Eberts’ second painting, “Surfer Essentials.” With a ’39 Chevrolet ‘Woody’ as its centerpiece, Eberts once again speaks to both prewar nostalgia and a ‘60s sensibility.

“Within ‘Surfer Essentials’ are almost all of the components necessary for a SoCal escape weekend, even if that weekend would be spent in Lincoln or Des Moines,” said Eberts. “I wanted to give the viewer an opportunity to not only see the painting, but in a very real sense get their feet wet. Surf – as they say – is up!”

For some fifty years, Ken Eberts has been regarded as one of his generation’s foremost automotive artists, and his work continues to be featured at the world’s most prestigious automotive events. It has been distributed widely, reproduced as magazine and book covers, Christmas cards, prints and promotional posters.

Growing up in the Bronx, Eberts is a graduate of New York’s High School of Music and Art and Los Angeles’ Art Center College of Design. Ken began his career as an automotive designer for the Ford Motor Company in the mid-‘60s. His extensive body of work since then led to his appointment as Ford’s official Centennial Artist in 2003, creating 13 original paintings commemorating Ford’s 100th anniversary. As a founding member of the Automotive Fine Arts Society, Ken has served as its president since its inception. The AFAS has been a part of Pebble Beach festivities since 1983.

The AFAS exhibit opens at the New Masters Gallery at 10:00 a.m. on Saturday, August 10 and closes at 5:30. Those hours will continue through Friday, August 16. On Saturday (August 17), the exhibit again opens at 10:00 a.m., while a reception honoring the latest AFAS artists work begins at 4:00 p.m. and concludes at 6:30. The reception has evolved into a popular hotspot for celebrities, art collectors and industry leaders to preview and purchase the latest AFAS pieces. The gallery is located at Dolores St. between Ocean Ave. and 7th St. in Carmel-By-The-Sea, California.

About the Automotive Fine Arts Society
AFAS was first established in 1983 by a group of artists who are acknowledged by critics to be among the best in their field. Members work in diverse mediums, including oil, watercolors, acrylics, wood, gouache, pen & ink, clay and metal. AFAS and its members have participated in select shows across the country, including the Pebble Beach Concours d’Elegance, Dana Point Concours d’Elegance and the Amelia Island Concours d’Elegance. Additional information about the Automotive Fine Arts Society is available at www.autoartgallery.com.