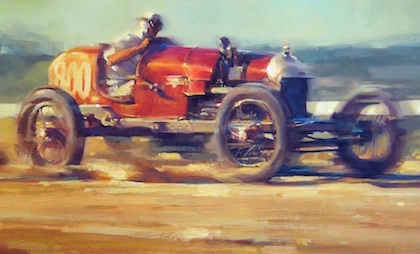 “Pebble Beach has an electrifying energy to it, which makes it the perfect stage to set the scene for my newest high-speed auto painting,” said Fritz. “My purpose for this latest painting was to magnify the speed, intensity and excitement of a breathtaking automobile in motion in a way that captured my audience’s attention. I look forward to showcasing my painting alongside other esteemed automotive artists.”

Fritz’s painting entitled “Dishing It Out” is a stunning oil on panel featuring a beautiful red 1930’s Sprint car with the driver intensely fixated on the dirt path. Measuring 9” x 22”, this larger-than-life work is a tangible reproduction of a raw, unfiltered motor car kicking up dirt clouds as it speeds along the track.

“My desire to translate the speed and motion of a vehicle while also conveying the dynamic atmosphere around it has been one of the pinnacle achievements of my career,” Fritz said. “Every painting that I create presents its own set of challenges, but also adds a completely unique dynamic that helps bring each piece to life.”

After earning his bachelor’s degree in two-dimensional art from California State University Northridge, Fritz worked with Fortune 500 defense firms including ITT, Litton Industries and Northrop Grumman for more than two decades. He has served clients such as Petersen Publishing and the United States Army and Air Force as a designer and illustrator, while accepting freelance commissions on his own time.

Fritz is currently represented by the Sander’s Galleries in Tucson, Arizona, and Kustom Lane Gallery in Melbourne, Australia. His work can be found in many private and corporate collections around the world, including the Smithsonian Institution’s National Postal Museum, the corporate office of the AAA, the Wally Parks’ NHRA Museum, Pittsburgh Paint and Glass, General Motors, and the Ford Motor Company. His work has been reproduced in several internationally published magazines.

Today, he paints out of his studio in Ventura County, California. He was commissioned to paint the portraits of Willie G. Davidson, and retired CEOs Richard Teerlink and Jeff Bleustein. Five of Tom’s works were chosen by the U.S. Postal Service for the Muscle Cars (Forever®) stamp series.

About the Automotive Fine Arts Society
AFAS was established in 1983 by a group of artists who are acknowledged by critics to be among the best in their field. Members work in many diverse mediums including oil, watercolors, acrylics, wood, gouache, pen & ink, clay and metal. AFAS and its members participate in select shows across the country including the Pebble Beach Concours d´Elegance, Dana Point Concours d’Elegance and the Amelia Island Concours d´Elegance. Information about AFAS is available at www.autoartgallery.com or by contacting Tyler Weiland at 214.520.3430 X 302 or TWeiland@tprm.com