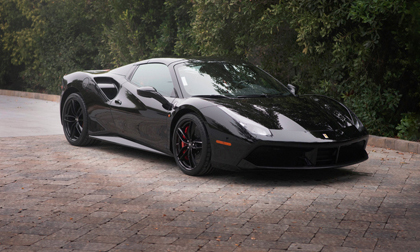 LAS VEGAS – Sept. 09, 2019 – Barrett-Jackson, The World’s Greatest Collector Car Auctions, will offer an impressive selection of supercars at its 12th Annual Las Vegas Auction at the Mandalay Bay Convention Center, October 3-5, 2019. Among the supercars set to star on this year’s Las Vegas Auction block are Lamborghini, Dodge, Ford and Ferrari, including a stunning 2019 488 Spider convertible (Lot #749) presented with a Nero DS finish.

“There’s a tangible excitement that fills the room whenever a supercar crosses the auction block,” said Craig Jackson, chairman and CEO of Barrett-Jackson. “I believe that’s largely because these are the aspirational cars many of us grew up dreaming to own. Their sleek, aerodynamic designs and state-of-the-art engineering have been orchestrated together to obtain the pinnacle of performance and speaks to the heart of all automotive enthusiasts. We can’t wait to share some incredible examples of supercars with our guests in Las Vegas next month.”

A heavily optioned 2019 488 Spider convertible (Lot #749) will be among a handful of Ferraris crossing the Las Vegas Auction block in October. Presented in Nero DS, this twin-turbo Spider is powered by a 3.9-liter mid-mounted V8 engine producing 661 horsepower at 8,000 rpm. Also on the docket is a Rosso Corsa 2014 Ferrari California convertible (Lot #763) has 7,984 miles and is capable of 483 horsepower with its 4.3-liter V8 engine, as well as a 2013 458 Spider (Lot #746) that features an F1-style 7-speed dual clutch transmission and a carbon-fiber driver zone with navigation, Bluetooth and satellite radio.

“The astonishing range of collectible vehicles available at Barrett-Jackson makes our events truly unique,” said Steve Davis, president of Barrett-Jackson. “This year’s Las Vegas Auction, for example, will include several highly sought-after supercars, like the second- and third-generation Ford GTs. These stunning supercars are destined to be the real stars in Vegas and will make an enviable addition to any collection, right alongside a custom Bel Air or a Resto-Mod Mustang, which will also be in the spotlight in October.”

Several Ford GTs  will be represented in Las Vegas, led by an exceptional 2017 Ford GT ’66 Heritage Edition (Lot #747). Finished in the ’66 Heritage theme, this GT honors the GT40 driven to victory at the 1996 Le Mans – a 1-2-3 Ford sweep. With less than 20 miles, this GT has a unique serialized identification plate and is powered a mid-mount V6 EcoBoost turbocharged engine cranking out over 600 horsepower. Another offering, Lot #748, is a 2006 Ford GT Heritage Edition finished in the classic Gulf Livery and one of only 343 built.

Lot #757 is a one-of-one Dodge Viper ACR with 395 actual miles. Finished in a special Brilliant Black exterior with GTS Blue stripes, it has the ACR Extreme Aero package with adjustable splitter and rear wing, 10-position suspension setting and exterior carbon-fiber package. A 2014 Lamborghini Gallardo (Lot #711) finished in Bianco Moncerus and powered by a V10 longitudinal mid-rear-mounted engine is also among the supercars on the Las Vegas docket.

Other supercars that will cross the Las Vegas Auction block include: