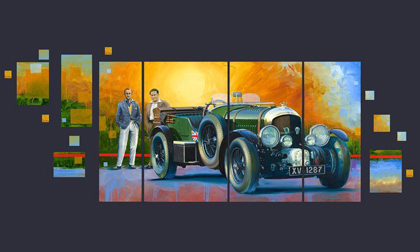 CARMEL, Calif. – July 25, 2018 – Charles Maher, an award-winning painter and member of the Automotive Fine Arts Society, will debut new paintings at the group’s exhibit and reception during the Pebble Beach Concours d’Elegance on Sunday, August 26th in Carmel, California. One of his key works is a massive salute the legendary “Bentley Boys” and their spectacular history. This is the 21st year that Lincoln Motor Company will sponsor the AFAS exhibit on the Pebble Beach show field.

“While the 1929 crash would send the Bentley car company into insolvency, leading to its eventual purchase by Rolls-Royce, Bentley British racing green was already ascendant,” said Maher. “The marque impressively won Le Mans in 1924, 1927, 1928 and 1929. It would then win again in 1930. And in the marque’s return to Le Mans in 2003, Bentleys would place both first and second. By that point, of course, the Bentley Boys were firmly ensconced in the Bentley legend.”

Maher’s Bentley epic piece is acrylic on canvas, spanning four primary canvases and thirteen accompanying canvases. It measures 44 inches by 110 inches, which is almost as wide as the Bentley is long!

Growing up in Miami, Florida, Maher drew his first automotive inspiration at the wheel of his family’s 1955 Chevy Bel-Air. Later, he earned a bachelor’s degree in Fine Art from the University of Notre Dame. Maher has held positions as a designer at Ford Motor Company, art director for a graphics firm and has – most recently – been an independent artist-illustrator-designer, providing design work for the Bricklin Car Co., Grumman Corp., the K-Mart/Little Caesars NASCAR team, Toyota, Honda and other manufacturers.

Maher’s publishing credits include Automobile Magazine, Road & Track, Racer and AutoWeek. His poster art commissions include those from the Pebble Beach Concours Poster, the Concours of America and the Concours d’Elegance at Ault Park, Woodward Avenue Dream Cruise and the Meadow Brook Historic Races. Motorsports has been dominant in establishing his enthusiasm for the automotive form; it wasn’t until he went to races that the car bug really bit. And so now sportscars and racing serve as the inspirations for most of his paintings today. For more information on Charles Maher’s art, visit his website.

About the Automotive Fine Arts Society
AFAS was established in 1983 by a group of artists who are acknowledged by critics to be among the best in their field. Members work in many diverse mediums including oil, watercolors, acrylics, wood, gouache, pen & ink, clay and metal. AFAS and its members participate in select shows across the country including the Pebble Beach Concours d´Elegance, Dana Point Concours d’Elegance and the Amelia Island Concours d´Elegance. Information about AFAS is available at www.autoartgallery.com.