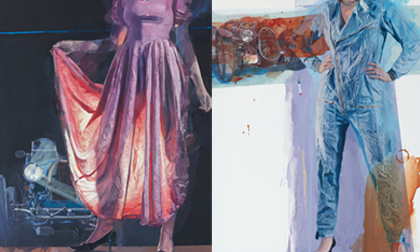 CARMEL, Calif. – August 10, 2018 – Stanley Rose, an award-winning painter and member of the Automotive Fine Arts Society (AFAS), will debut two original paintings at the group’s exhibit and reception during the Pebble Beach Concours d’Elegance on Sunday, August 26th in Carmel, California. This is the 21st year that Lincoln Motor Company will sponsor the AFAS exhibit on the Pebble Beach show field.

“In ‘Sophie’s Choice’, I’ve juxtaposed two of my favorite subjects – the female form and Ettore Bugatti’s Type 35B. And while the woman’s appeal is self-explanatory, there are few forms in the automotive realm more timeless than Bugatti’s Type 35,” asserted artist Stanley Rose. “This competition Bugatti, introduced in 1924, roared to wins in the ‘20s almost immediately, and was still winning at the beginning of the next decade.” ‘Sophie’s Choice’ is an oil on canvas, and measures 58 inches x 45 inches.

And if you give Sophie another choice, as Mr. Rose does in ‘Sophie’s Other Choice’, an oil on canvas study measuring 58 inches x 48 inches, it’s likely she’ll choose Alfa Romeo’s 8C 2900. As Mr. Rose noted, “with Alfa Romeo’s rebound in both Europe and the U.S., it’s nice to recall those cars that first established both the brand and the brand’s legend. The beauty of Alfa’s 8C 2900, along with the successes it garnered in international competition, did much to establish the Alfa Romeo nameplate, and would sustain the legend among car enthusiasts in the postwar period.” At the time of its design, the 8C 2900’s more enveloping bodywork was a nod to modernity, as is the model’s pantsuit.

In his art, Stanley Rose is continuously creating combinations of subjects rarely – if ever – explored by other artists. Stanley began his professional journey after obtaining a degree in Fine Art, and subsequently taught art for a number of years before making the leap into a full-time pursuit as an automotive artist. Typically, Rose’s work is defined by large canvases, where figures in vintage clothing are juxtaposed with classic cars.

In 1984, Rose moved to France to paint full-time, establishing his first studio aboard a Dutch barge in the heart of Burgundy. More recently, he relocated to a 14th century chateau that houses a collection of cars.

Rose began exhibiting his automotive art throughout Europe in 1988, and was welcomed as a member into the Automotive Fine Arts Society in 1999. Stanley has garnered an array of awards at Pebble Beach, including the Lincoln Award in 2002 and 2008; the Peter Helck award in 2001, 2008 and 2015; as well as awards of excellence on six occasions.

Mr. Rose continues to live in France with his wife Avril. To learn more about Stanley Rose and his work, visit www.stanley-rose.com.