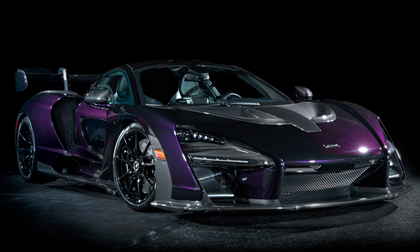 SCOTTSDALE, ARIZ. – Jan 16, 2019 – Barrett-Jackson, The World’s Greatest Collector Car Auctions®, announced today that it has added one of the rarest supercars, a 2019 McLaren Senna (Lot #1405), to its 48th Annual Barrett-Jackson Auction at WestWorld of Scottsdale in Arizona. Inspired by one of the world’s greatest racing drivers, Ayrton Senna, this 2019 McLaren Senna boasts a prized serial chassis number of 005 out of only 500 vehicles, and is one of approximately 120 in the United States.

“I’m a tremendous fan of Ayrton Senna and followed his racing career very closely,” said Craig Jackson, chairman and CEO of Barrett-Jackson. “I was thrilled when McLaren announced this special edition supercar in his honor. From its beautifully engineered aerodynamic body to its intense horsepower and record track times of any McLaren built before it, this Senna was designed for one purpose – to take performance to a whole new level. I couldn’t be more proud to have this amazing car cross our block this week in Scottsdale.”

Powered by a twin-turbocharged 4.0-liter V8 engine that makes an astonishing 789bhp and 590 ft/lbs of torque, the sensational Senna is capable of 0-62 mph in 2.8 seconds – and 0-124 mph in 6.8 seconds. The two-seat, carbon-fiber supercar comes with the performance upgrades of a race car, including oversized carbon ceramic brakes, active chassis control suspension, a 7-speed dual clutch Seamless Shift gearbox and advanced aerodynamics. With 800 horsepower behind you, 1,764 pounds of downforce above you, and an active suspension below you – the McLaren Senna offers the same chest-crushing, acceleration and face-distorting G-forces similar to flying a Lockheed Martin F-35 fighter Jet.

“This 2019 McLaren Senna is the perfect addition to this year’s Scottsdale docket, our largest consignment in history,” said Steve Davis, president of Barrett-Jackson. “Only 500 of these supercars will be made, and all of them have been sold since their announcement. Only at Barrett-Jackson will enthusiasts get the rare opportunity to own this limited production supercar.”

For more information on becoming a bidder, follow the link to http://barrett-jackson.com/bidder/home.  Experience the 48th Annual Scottsdale Auction in style with a Barrett-Jackson VIP Experience Package. Information on available packages and how to be a part of this world-class lifestyle event is available here.