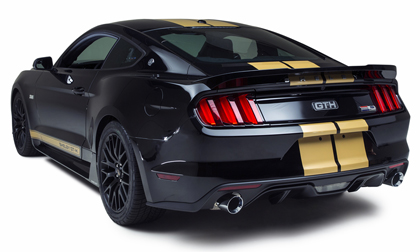 LOS ANGELES – June 2016 – With Aaron Shelby, grandson of the legendary Carroll Shelby on stage, Barrett-Jackson will auction the 50th anniversary Shelby GT-H (CSM160001C) concept and prototype car (Lot # 3003) for the Carroll Shelby Foundation at No Reserve during the inaugural Northeast Auction in Uncasville, Connecticut. At approximately 5:30 PM EST on June 24, The World’s Greatest Collector Car Auctions® will continue its tradition of raising money for charity by offering vehicles rarely available to the public. The Connecticut auction will feature a broad range of vintage, customs, supercars and late-model vehicles.

“Shelby and Barrett-Jackson have enjoyed a deep, strong relationship for decades,” said Aaron Shelby, co-President of the Carroll Shelby Foundation and board member of Carroll Shelby International. “Together we raised around $1.4 million dollars over the past 10 years for the charity that my grandfather founded, unveiled new vehicles and even created an exclusive Barrett-Jackson edition Shelby GT in 2008. I’m pleased the Carroll Shelby Foundation will sell this very rare car, which served as both the concept and prototype for the 50th anniversary Ford Shelby GT-H. It’s the perfect time, place and partner for the sale.”

On March 21, 2016, Shelby American unveiled a special run of performance-modified Ford Mustang GTs named the Shelby GT-H. The car celebrates the 50th anniversary of the Shelby GT350-H “Rent-A-Racer,” when Carroll Shelby approached Hertz about putting customers in the driver’s seat of this special edition car.

For the 2016 Ford Shelby GT-H, Hertz purchased the V8 powered Mustangs from Ford Motor Company and the cars were then shipped to Shelby American. There, Shelby added extra performance and style then sent them to Hertz, which gave the public access to a unique driving experience.

The vehicle being auctioned has led a colorful existence. CSM160001C is both the concept and prototype car for the 2016 program. It is the vehicle in all promotional materials and photographs; visitors to the New York Auto Show were amazed to see it suspended on the Jacob K. Javits Convention Center wall.

“Barrett-Jackson has sold more concepts, prototypes and serial number one cars for automakers than any other auction house in the world,” said Craig Jackson, chairman and CEO of Barrett-Jackson. “Car manufacturers bring these vehicles to Barrett-Jackson because we attract the most passionate, most dedicated collectors and enthusiasts in the world. Carroll Shelby was a close friend and a fixture at our events. We’re pleased to help raise money for Carroll’s charity by giving someone the opportunity to own this very special car.”

CSM160001C is scheduled to go over the block at No Reserve at about 5:30 PM EST, during the live TV broadcast by Velocity. The winning bidder will not only get an amazing contemporary collectible car, they will also contribute to the charity that Carroll Shelby founded.

“We’re excited this very unique car will be sold by Barrett-Jackson,” said James Owens, Ford Performance Marketing Manager. “It’s unusual for a vehicle to be both a concept and prototype, but the short time frame available for the program required fast track development of a car. In the past, it would’ve gone into Carroll Shelby’s personal collection. So someone will own a vehicle with instant history that cannot be duplicated.”

The inaugural Northeast Auction at Mohegan Sun, June 23-25, will be broadcast live on Velocity and Discovery Channel. For more information on becoming a bidder, follow the link to http://www.Barrett-Jackson.com/Bidder/Home. For auction information, visit the  Barrett-Jackson website or Facebook.

About The Barrett-Jackson Auction Company
Established in 1971 and headquartered in Scottsdale, Arizona, Barrett-Jackson, The World’s Greatest Collector Car Auctions®, is the leader in collector car auctions and automotive lifestyle events. The company produces auctions in Scottsdale, Arizona; Palm Beach, Florida; at Mohegan Sun in Connecticut, and Las Vegas, Nevada. With broadcast partners, Velocity and Discovery Channel, Barrett-Jackson will feature live television coverage in 2016, including broadcasts in over 100 countries internationally. Barrett-Jackson also endorses a one-of-a-kind collector car insurance for collector vehicles and other valued belongings. For more information about Barrett-Jackson, visit http://www.barrett-jackson.com or call 480-421-6694.