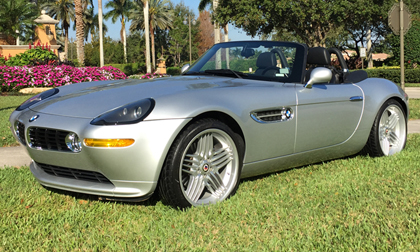 “We’re bringing some top-down fun to the Sunshine State with some incredible convertibles during our 15th Annual Palm Beach Auction,” said Craig Jackson, chairman and CEO of Barrett-Jackson. “Convertibles and roadsters of every kind have garnered incredible attention at our events, especially in Florida. That’s because they offer more than just good looks ‒ they also offer an exciting driving experience that can’t be matched by a coupe.”

Among the convertibles crossing the Palm Beach Auction block is #336 of only 555 BMW Z8 Alpinas (preview) built in 2003. It features a full automatic transmission with all of the luxury amenities, including a factory flip phone, 6-disc CD and rack for the hardtop. With only 36,000 miles, it is a true collector convertible.

Built by some of the best custom coachwork shops, a 1962 Cadillac Custom Convertible known as “Cadalina” (preview) combines the outstanding original body lines and space-age flavor of the original car with modern presence and function. The subtly modified Cadillac body features a Mediterranean Sea Blue and Pearl custom paint finish. The chassis is equipped with RideTech air suspension, including Shockwave aluminum air shocks and General Motors disc brakes. Under the hood is a 5.3-liter LS V8 engine and a GM 4L60E overdrive automatic transmission.

“Everyone wants to have a convertible in their garage,” said Steve Davis, president of Barrett-Jackson. “Convertibles are often more rare than a coupe, giving owners an opportunity to enhance the value of their collection. Whether it’s a beautiful Resto-Mod, a late-model exotic or original muscle car, convertibles have a universal appeal.”

For more information on becoming a bidder, follow the link to http://www.Barrett-Jackson.com/Bidder/Home. To consign a vehicle for the 2017 Palm Beach Auction, click here,