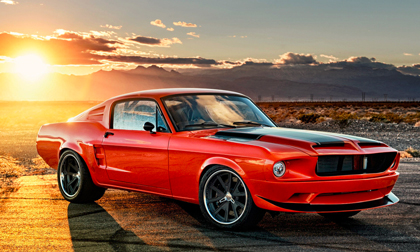 “Resto-Mods have become the new standard in vehicle customization,” said Craig Jackson, chairman and CEO of Barrett-Jackson. “The build-up in demand for Resto-Mods, however, isn’t all that surprising.  Many collectors have become used to the modern creature comforts found in today’s cars but are still attracted the nostalgia of the classic designs. Our Las Vegas Auction will have some of the very best examples of professionally built Resto-Mods cross the block in October.”

Known as “55-Z06,” Lot #775 is a 1955 Chevy Bel Air hardtop that took nearly two years to complete. Driven only 225 miles since its completion, this Resto-Mod is powered by a Z06 Corvette LS7 engine that delivers 505 horsepower and is equipped with a Z06 6-speed manual transmission. A 1965 Corvette Custom Convertible (Lot #765) had a no-expense-spared, frame-off restoration and features the best of modern technology and conveniences. Built with a LS7 engine mated to a TREMEC 5-speed manual transmission, it drives and handles like a modern car with the classic Corvette style.

“The trend of Resto-Modded vehicles came as a natural progression in the hobby.” said Steve Davis, president of Barrett-Jackson. “Many of these vehicles are resurrected from a former life into something that’s truly worth admiring and driving. The perfect fusion of classic style and modern performance in these builds encapsulates the new renaissance of custom car culture we’re currently experiencing.”

Dodge vehicles will also be a part of the docket crossing the block in Las Vegas, including a  powerful 1957 Power Wagon Crew Cab Pickup (Lot #741). Built by Tisdale Coachworks, this 2-year project is powered by a 5.9-liter Cummins diesel engine, is finished in Ferrari Grigio Silverstone, and boasts 6-way power Cadillac bucket seats and a folding rear bench. A 1970 Dodge Charger Coupe (Lot #722) is the product of a complete rotisserie restoration and features a fuel-injected 612-horsepower engine. Inside, this Dodge features automatic door locks, iPad interface, Dakota Digital controller, Vintage Air and 6-way power leather seats.

Other Resto-Mods consigned for the Las Vegas Auction include: