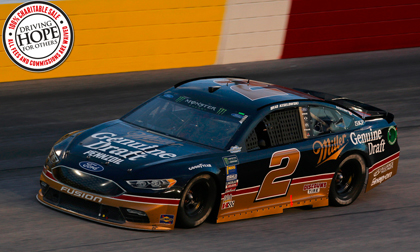 LAS VEGAS – Sept. 26, 2019 – Barrett-Jackson, The World’s Greatest Collector Car Auctions, will continue its company-wide dedication of giving back to those in need with the sale of three outstanding charity vehicles during the 12th Annual Las Vegas Auction at the Mandalay Bay Resort and Casino, October 3-5, 2019. To date, Barrett-Jackson has raised over $118 million for more than 160 local and national charities including United Way, Reach Out WorldWide and JDRF.

“We’ve experienced so many incredible moments of generosity this year through the sale of charity vehicles,” said Craig Jackson, chairman and CEO of Barrett-Jackson. “Since our Scottsdale Auction earlier this year, we’ve raised over $15 million, and much-needed awareness, for 19 charities that serve people from all walks of life. Our Las Vegas Auction will continue our philanthropic spirit with the sale of three vehicles, with 100 percent of the hammer price going straight to charity.”

Crossing the block on Thursday, October 3, is a one-off aviation-themed 2009 Ford Mustang (Lot #3000). Dubbed “AV8R,” this one-of-a-kind custom pony car was created by a team including Mustang Design Chief Doug Gaffka and Chief Nameplate Engineer Paul Randle. The AV8R is fueled by a 400-horsepower supercharged V8 engine mated to a 6-speed manual transmission. The combination of paint, open-sky canopy and an aviation-inspired distressed “bomber jacket” leather interior invokes the spirit of aircraft. The Mustang AV8R is autographed by aviation legends and celebrities, including Harrison Ford, Edsel B. Ford II, Jack Roush, Carroll Shelby and others. One hundred percent of the sale of this vehicle will benefit Reach Out WorldWide (ROWW).

“The energy felt in the arena and on the block during a charity sale is simply immeasurable,” said Barrett-Jackson President Steve Davis. “We’re fortunate enough to partner with some of the biggest names in the automotive industry to raise money for charitable organizations that are making a real difference in people’s lives. This year’s Las Vegas Auction will be a spectacular bookend for Barrett-Jackson’s 2019 charity sales.”

Crossing the block on Saturday, October 5, is a 2005 Ford GT (Lot #3002). Used as a Ford Performance development and promotional car for the launch of the second-generation Ford GT, Lot #3002 has a truly special history. Donated by Ford Motor Company, this GT is finished in white with blue stripes was built specifically for media drives, show appearances and product development. Powered by its original 5.4-liter V8 engine mated to a 6-speed manual transmission, this GT was also used by Ford Racing to develop components that helped privateers competitively race the Ford GT, including a 700+ horsepower supercharger upgrade that is still on the vehicle. Piloted by many famous drivers, including Trans Am star Tommy Kendall and Andy Slankard, 100 percent of the hammer price will be donated to benefit the JDRF.