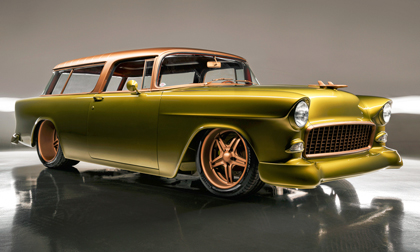 “Like a work of art, a well-built custom vehicle turns a builder’s vision into a reality,” said Craig Jackson chairman and CEO of Barrett-Jackson. “Barrett-Jackson has proudly been the authority on top-of-the-line custom vehicles for over three decades. We’re thrilled to announce that our 2020 Scottsdale Auction docket will continue to build on that legacy with one of the most impressive selections of hot rods and custom builds we’ve ever seen. Additionally, our extended Fantastic Friday and Super Saturday prime-time hours will give our bidders more chances to own the hot rod or custom of their dreams.”

A host of professionally built customs bearing their own unique names will cross the block in Scottsdale, including a 1953 Chevrolet Bel Air Custom Coupe (Lot #1383) nicknamed “Vortex.” Built by Weaver Customs and honored as the 2019 “World’s Ultimate GM,” this Bel Air has received numerous custom all-steel body modifications and is powered by a twin-supercharged LSX 376ci V8 engine mated to a 3-speed automatic transmission. Nicknamed “Gone Mad,” Lot #1320 is a 1955 Chevrolet Nomad Custom Wagon powered by a 509ci V8 all-aluminum engine mated to a 4-speed automatic transmission. This Super Chevy cover car sits on a Roadster Shop chassis and has received thousands of hours of custom sheet metal work.

“Cars take on their own personality when they are being planned out or when they are under construction,” said Sydney Weaver, Marketing Director of Weaver Customs. “Names usually embody the attitude of a car. Some are bolder, which likely is indicative of big horsepower and aggressive stance. Others are more mild, reflecting a cruising and carefree nature.”

Custom pickups on deck at Scottsdale ready to swing for the fences include a 1967 Volkswagen Type II Double-Cab Custom Pickup (Lot #1446) featuring a VW Bus sunroof. Nicknamed “Double Deluxe,” this custom pickup is powered by a 1915cc 4-cylinder engine and features custom body and paint by Kindig-It Design. Built from the ground up by the Squarebody Syndicate, Lot #1431 is a 1976 GMC Sierra Grande Custom Pickup autographed by Bobby Unser. This red, white and blue pickup rides on a Roadster Shop chassis and is powered by a supercharged LS3 engine mated to a 6-speed manual transmission.

“Over the last 30 years, Barrett-Jackson has put professionally built customs and hot rods on the world’s stage,” said president of Barrett-Jackson Steve Davis. “Many of the highly custom vehicles that cross our auction block take a specialized team hundreds of arduous man-hours to bring a unique vision to reality. Builds like a 1969 Chevrolet Camaro (Lot #1319.1) headed to Scottsdale are finished with dozens of bespoke accents and features, making them true one-of-a-kind creations.”

The Scottsdale Auction will also have a number of professionally built classic hot rods including a 1932 Ford Custom Roadster (Lot #1432). Boyd Coddington’s shop manager, Dick Brogdon, purchased this car from Boyd in 1987, and built it at his shop over the next 20 years. Crowned “America’s Most Beautiful Roadster” in 2011, Lot #1313 is an all-steel 1934 Ford Custom Roadster built by Squeeg’s Kustoms of Chandler, Arizona. This hot rod is Powered by fuel-injected 427ci Ford Windsor V8 engine with a 4-speed automatic transmission.

Other custom creations that will be featured at the Scottsdale Auction include: