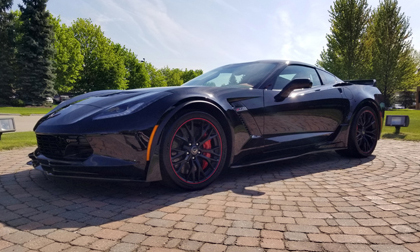 UNCASVILLE, CONN. – May 16, 2019 – Barrett-Jackson, The World’s Greatest Collector Car Auctions, and General Motors will auction the last production C7 Chevrolet Corvette during the 4th Annual Northeast Auction, June 26-29, 2019, at Mohegan Sun in Connecticut. The last production C7 Corvette will cross the block on Friday, June 28, with 100 percent of the hammer price benefiting the Stephen Siller Tunnel to Towers Foundation, which supports the nation’s first responders and catastrophically injured service members.

“We’re honored that General Motors chose our Northeast Auction to sell this historic Corvette in support of the vitally important Stephen Siller Tunnel to Towers Foundation,” said Craig Jackson, chairman and CEO of Barrett-Jackson. “Where one chapter ends, another begins. The sale of this final production C7 Corvette Z06 will be the opportunity of a lifetime to own a piece of automotive history. While it marks the end of an era, it also ushers in the beginning of the next generation of America’s favorite sports car.”

The last C7 Corvette will be a black Z06 coupe with a 3LZ trim level to provide the ultimate sport and luxury experience. Powered by a 6.2-liter supercharged V8 producing 650 horsepower mated to a 7-speed manual transmission, this extraordinary Corvette will also feature a custom leather-wrapped interior package, Performance Data Recorder, navigation and Brembo brakes.

“Barrett-Jackson and General Motors made history when we sold the first-production C7 Stingray in 2013,” said Steve Davis, president of Barrett-Jackson. “During our Northeast Auction in June, we’ll close the chapter on the current generation Corvette with the sale of the last C7 Z06 that will be built by General Motors. I can’t think of a better way to usher in a new generation of Corvette than with the entire hammer price benefiting our nation’s bravest heroes.”

The Stephen Siller Tunnel to Towers Foundation was established in 2002 to honor the memory of Stephen Tiller, a New York City firefighter who lost his life on 9/11. The goal of the Foundation is to continue Stephen’s legacy through its programs that support our nation’s first responders and catastrophically injured military service members.

“General Motors and Chevrolet are proud to honor and support the brave men and women of our Armed Forces,” said Steve Hill, GM vice president of U.S. sales and service. “With the proceeds from the auction of this Corvette, we’ll offer additional financial support for our most severely wounded veterans through the Building For America’s Bravest program.”

Building for America’s Bravest is a program of the Stephen Siller Tunnel to Towers Foundation that builds smart homes for catastrophically injured service members returning home. Each home is custom designed to address the unique needs of each individual. Energy efficient, automated and easily accessible, these homes use “adaptive technology” to help severely injured heroes live better, more independent lives.

About Mohegan Sun
Owned by Mohegan Gaming & Entertainment, Mohegan Sun is one of the largest, most spectacular entertainment, gaming, dining and shopping destinations in the United States.  Situated on 185 acres along the Thames River in scenic southeastern Connecticut, Mohegan Sun is home to two unique casinos, 1,600 deluxe hotel rooms, two world-class spas, a golf course, over 80 shops, restaurants and bars as well as three award-winning entertainment venues including a 10,000-seat Arena. Mohegan Sun is within easy access of New York, Boston, Hartford and Providence and located 15 minutes from the museums, antique shops and waterfront of Mystic Country. More information is available by calling 1.888.226.7711 or visiting mohegansun.com. Connect with us on Facebook, follow us on Twitter and Instagram @mohegansun, view us on YouTube and find us on Snapchat at username MoheganSun.