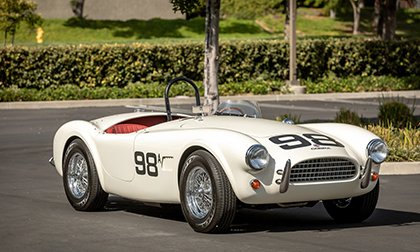 PALM BEACH, Florida – March 4, 2020 – Barrett-Jackson, the World’s Greatest Collector Car Auctions, heads to the Sunshine State with a docket of unique and desirable convertibles during the 18th Annual Palm Beach Auction April 16-14, 2020, at the South Florida Fairgrounds. Among some of the noteworthy drop-tops crossing the block in the Orange State is a stunning Larkspur Harbor Blue 1957 Chevrolet Bel Air Convertible (preview). The nut-and-bolt restored Bel Air is powered by a 283ci Power Pack V8 engine with a 4-barrel carburetor and dual exhaust.

“If you’re behind the wheel, or just along for the ride, convertibles connect us with the road in a very intimate way,” said Craig Jackson, chairman and CEO of Barrett-Jackson. “Whether you call it a convertible, volante or roadster, these drop-top vehicles are coveted among collectors for their design, style and driving experience. We couldn’t be more excited about our Palm Beach Auction docket, which will include some of the most coveted classic, late-model and exotic convertibles all selling at No Reserve.”

Convertibles crossing the block in April include a 1966 Chevrolet Corvette convertible Resto-Mod (preview) built by Jeff Hayes Customs. This metallic silver Corvette rides on an Art Morrison chassis, is equipped with Vintage Air and has a powerful a 540-horsepower LS3 Hot Cam V8 engine. A matching-numbers, rotisserie-restored 1953 Buick Skylark (preview) finished in red with a white power convertible top is highly optioned and is powered by a 322ci V8 engine. Joining the Buick is a 1966 Sunbeam Tiger convertible (preview) powered by an upgraded pro-built 302ci V8 engine and authenticated by the Sunbeam Tiger Owners Association. Finished in Carnival Red, it comes equipped with an upgraded Connolly leather interior and British Wilton carpet.

“We’re incredibly proud of the measures we take to build dockets that resonate with our buyers,” said Steve Davis, president of Barrett-Jackson. “Florida is a known for its beautiful beaches, endless days of sunshine and tropical climate that make it the perfect for drop-top driving. This year’s Palm Beach docket is going to deliver some of the finest convertibles, giving our bidders the chance to chase the sunshine in the convertible of their dreams.”

Select roadsters selling at the Palm Beach Auction include a fully restored 1959 Mercedes-Benz 190SL (preview). Powered by a 1.9-liter inline-4 engine mated to a 4-speed manual transmission, this classic 190SL is finished in white over a red leather interior and features whitewall tires. Another unique roadster is a one-owner 2012 Morgan 3-Wheeler (preview) with a 1910cc S&S V-twin engine. This unique aluminum-bodied roadster features the factory Bright Package, consisting of polished chrome surfaces on the exhaust system, roll hoops, cowl, engine and headlights.

A special roadster crossing the block in Palm Beach is the first of 100 production 2020 Shelby 289 Cobra “Cinema Series” (preview). This 1963 “Ken Miles” edition Slabside Cobra CSX8198 replicates one of the cars used in the epic film “Ford v Ferrari” and is based on the initial street Cobras converted for racing. This model will include a Carroll Shelby engraved wrench and a spare cracked race windshield (as seen in the movie). The Cobra has a stroked 331ci Shelby 289 engine producing 450 horsepower sending power to the rear wheels via a 5-speed TREMEC manual transmission.

Other convertibles crossing the auction block in Palm Beach include:

Beginning with this year’s Palm Beach Auction, enthusiasts can catch the live auction broadcast on FYI and HISTORY. To catch all the cars all the time, Barrett-Jackson auctions can also be streamed online at www.Barrett-Jackson.com.

About The Barrett-Jackson Auction Company
Established in 1971 and headquartered in Scottsdale, Arizona, Barrett-Jackson, The World’s Greatest Collector Car Auctions, is the leader in collector car and automotive lifestyle events, which include authentic automobilia auctions and the sale of high-profile estates and private collections. The company produces auctions in Scottsdale, Arizona; Palm Beach, Florida; at Mohegan Sun in Connecticut; and Las Vegas, Nevada. With broadcast partners FYI and HISTORY, Barrett-Jackson will feature live television coverage in 2020 on FYI and HISTORY, as well as all the cars, all the time via the live stream on Barrett-Jackson.com. Barrett-Jackson also endorses a one-of-a-kind collector car insurance for collector vehicles and other valued belongings. For more information about Barrett-Jackson, visit www.barrett-jackson.com, or call 480-421-6694.