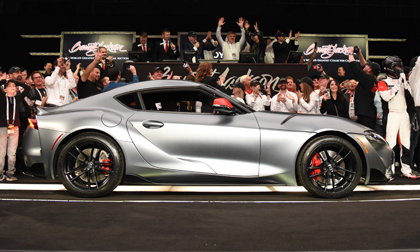 SCOTTSDALE, Ariz. – Dec. 16, 2019 – Barrett-Jackson, The World’s Greatest Collector Car Auctions, is proud to announce Toyota and Lexus as official partners at all Barrett-Jackson auctions through 2022. Toyota, along with Lexus, will be joining Chevrolet, Dodge and Ford in the Sponsor Pavilion.

“We’re proud to have Toyota and Lexus join the Barrett-Jackson family as official manufacturer sponsors through 2022,” said Craig Jackson chairman and CEO of Barrett-Jackson. “Our relationship with Toyota started at the 2019 Scottsdale Auction where we sold the first production 2020 Toyota Supra VIN 001 for $2.1 million benefiting the American Heart Association and the Bob Woodruff Foundation. Giving back to those in need is integral to Toyota, Lexus and Barrett-Jackson, each raising millions of dollars each year for charities around the world.”

The three-year, national sponsorship for the four auctions held each year, will include display spaces containing their latest models, heritage vehicles and special development vehicles. Toyota will also join other manufacturers at the Barrett-Jackson Performance Track. In Scottsdale, guests can experience the excitement of drifting in a Toyota Supra firsthand. Lexus will also be in the Sponsorship Pavilion at all four auctions with a special display of luxury vehicles and will serve as the presenting Sponsor of the Scottsdale 2020 Opening Night Gala.

“Barrett-Jackson is a natural partnership for Toyota and Lexus, allowing us to connect with car enthusiasts around the world,” said Bob Carter, executive vice president of sales, Toyota Motor North America. “The energy on the auction floor is contagious, as we experienced when we sold the very first 2020 GR Supra earlier this year. We’re proud to enter this three-year partnership, and excited to bring new guest experiences to Barrett-Jackson auctions.”

About ToyotaToyota has been a part of the cultural fabric in the U.S. and North America for more than 60 years, and is committed to advancing sustainable, next-generation mobility through our Toyota and Lexus brands. During that time, Toyota has created a tremendous value chain as our teams have contributed to world-class design, engineering, and assembly of more than 38 million cars and trucks in North America, where we have 14 manufacturing plants, 15 including our joint venture in Alabama (10 in the U.S.), and directly employ more than 47,000 people (over 36,000 in the U.S.). Our 1,800 Toyota and Lexus North American dealerships (nearly 1,500 in the U.S.) sold 2.8 million cars and trucks (2.4 million in the U.S.) in 2018.

To consign a vehicle, receive more information on becoming a bidder, or purchase tickets for the 2020 Scottsdale Auction, visit www.Barrett-Jackson.com.