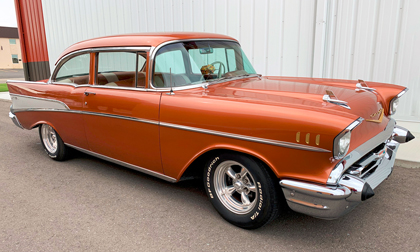 LAS VEGAS – Sept. 23, 2019 – Barrett-Jackson, The World’s Greatest Collector Car Auctions, will bring some real “star power” with celebrity cars once owned by entertainment legends to its 12th Annual Las Vegas Auction at the Mandalay Bay Casino and Resort, October 3-5, 2019. Among the “star cars” set to shine on the auction block are vehicles once owned by Hollywood actors Nicolas Cage and Richard Pryor, as well as legendary musicians Frank Sinatra and Liberace.

A Sierra Gold 1957 Chevrolet Bel Air Custom 2-Door Post (Lot #387), previously owned by actor Nicolas Cage, is powered by a modified 327ci V8 engine backed by a 700R4 automatic transmission. It sits on 15-inch American Racing wheels and is equipped with power Wilwood disc brakes. Also ready for its time to shine on the auction block is a 1981 Mercedes-Benz 280CE (Lot #51) once owned by legendary comedian and actor Richard Pryor. This black-on-black Mercedes comes with proof of ownership validated by Pryor’s registration card for the state of California.

A 1994 Mercedes-Benz E420 (Lot #55) set to cross the block in Las Vegas was originally owned by Frank Sinatra. It was later purchased by Hollywood actress Angie Dickinson, who co-starred with Sinatra in the 1960s movie “Ocean’s 11.” This well-maintained E420 still has its original factory telephone and factory chrome wheels, and is powered by a 4.2-liter V8 engine with a 4-speed automatic transmission.

Also featured on the Las Vegas docket is a 1983 Bremen Sebring (Lot #354) that was sold new to Lee Liberace on June 1, 1983. Liberace owned the car for five years, but drove it 1,690 miles. It was sold in April 1988 during Liberace’s estate sale to singer Jimmy Velvet before being acquired by the current owner. This star-studded Sebring is powered by a rear-mounted GM 3.8-liter 6-cylinder engine with a 3-speed automatic transmission.

Lot #345.1 is an original and unmodified 1992 GMC Typhoon Carryall that was purchased new by actor Bill Bixby, best known for his work in the late 1970s as Dr. David Banner in the television series “The Incredible Hulk.” This all-wheel-drive Typhoon Carryall is powered by a 4.3-liter turbocharged V6 engine with intercooler, backed by a 700R4 automatic transmission.

“Some collector cars are all about their history and what that means to the enthusiast enjoying them,” said Steve Davis, president of Barrett-Jackson. “Some of the most unique of these cars come with direct connections to celebrities we all know and love. They give us a special connection to those people who often transcend the cars themselves. These machines take on a life of their own, and, like their original owners, they will always stand head and shoulders above the rest.”