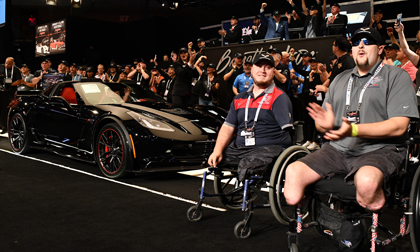 UNCASVILLE, CONN. – July 1, 2019 – Barrett-Jackson, The World’s Greatest Collector Car Auctions, made history with the sale of the last-built C7 Chevrolet Corvette (Lot #3001) and continued to fuel the hobby with a diverse docket of collector vehicles during the 4th Annual Northeast Auction, June 26-29, 2019, at Mohegan Sun in Connecticut. Sales over the four-day event also continued to point to the growing popularity of Resto-Mods and late model performance vehicles. The rise in popularity of Japanese collector cars was also highlighted when a 1997 Toyota Supra Anniversary Edition (Lot #711) sold for a record $176,000, making it one of the top ten vehicles sold. Among the top ten vehicles sold during this year’s Northeast Auction, six set new auction records.

In total, 545 vehicles sold for over $21.8 million with a 100 percent sell-through rate, while 470 pieces of automobilia brought in $766,000, and more than $2.8 million was raised through the sale of three charity vehicles, bringing the total auction sales to more than $24 million.

“We’re so appreciative of all our guests, sponsors and exhibitors who contributed to this auction and made it such an extraordinary event,” said Craig Jackson, chairman and CEO of Barrett-Jackson. “Thanks to everyone’s participation and efforts, we hit incredible milestones as we wrote new pages in automotive history. Chief among those was a new charity auction record set by the last-built C7 Corvette. This special moment closed an era for Corvette and also raised critical support for our nation’s heroes. We built so much momentum this year in Scottsdale, Palm Beach and the Northeast that we can’t wait to top it off in Las Vegas this October.”

The top vehicles sold during the 2019 Northeast Auction included:

Vehicles from the Vault Portfolio and David Maxwell Collection, crossed the block during this year’s Northeast Auction. A total of 47 collector cars from the Vault Portfolio are being sold at No Reserve during three Barrett-Jackson events, including the 2019 Northeast and Las Vegas Auctions, as well as the 2020 Scottsdale Auction. Eight vehicles from the Maxwell Collection also sold during this year’s Northeast Auction, including a 1971 Plymouth Cuda Resto-Mod (Lot #685), which hammered in at $165,000 and is among the top vehicles sold during the auction.

“Collector cars are the heart and soul of everything we do,” said Steve Davis, president of Barrett-Jackson. “But we’ve gone a step further to create an immersive lifestyle experience around the auction that’s unmatched in this great hobby. We offered terrific symposiums led by top automotive experts and hands-on exhibits. For the first time since its introduction, Ford offered select rides to the public in the adrenaline-pumping Ford GT supercar. Only at Barrett-Jackson can you drive home the car of your dreams, rub shoulders with industry legends and make memories that will last a lifetime.”

On Friday, the last-built seventh-generation (C7) Chevrolet Corvette made history when Dan Snyder of Dan Snyder Motorsports purchased it for $2.7 million – a new Barrett-Jackson charity sale record by an automaker-donated vehicle. The entire amount raised from the sale of the Corvette benefited the Stephen Siller Tunnel to Towers Foundation’s Smart Home Program. Mr. Snyder also bought the last-production models of the 2018 Dodge Challenger SRT Demon (Lot #3002.1) and 2017 Dodge Viper (Lot #3002) at the 2018 Barrett-Jackson Northeast Auction. To date, Barrett-Jackson has raised over $118 million for charity. Two other vehicles crossed the block to benefit charity during the Northeast Auction:

Barrett-Jackson’s Automobilia Auction featured over 470 authentic pieces, including items from the Terry Brannigan and Cedarmore Collections. Rounding out the top five automobilia items sold during the Northeast Auction were:

For more information on becoming a bidder or to consign a vehicle for the 2019 Las Vegas Auction, visit www.Barrett-Jackson.com.