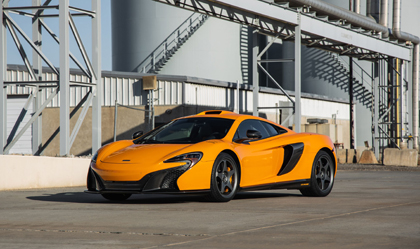 SCOTTSDALE, Ariz.  Nov. 21, 2019 – Barrett-Jackson, The World’s Greatest Collector Car Auctions, will sell an enviable array of limited and early production supercars from The Scott Thomas Collection at No Reserve during the 2020 Scottsdale Auction, January 11-19, 2020, at WestWorld of Scottsdale. The eight-vehicle collection includes a 2019 McLaren Senna (Lot #1393) and a 2005 Ford GT VIN 003 (Lot #1396).

“Some of the most exciting collections in the world have crossed the Barrett-Jackson block over the past five decades,” said Craig Jackson chairman and CEO of Barrett-Jackson. “As the collector car hobby has grown, our team has worked diligently to become the most trusted auction house to care for and sell prized collections, like Scott Thomas’. His collection reflects the demand for early-production and limited-production supercars, like the rare 2019 McLaren Senna and the 2005 Ford GT VIN 003. Both are sure to be highlights of our 2020 Scottsdale Auction.”

The Scott Thomas Collection boasts three race-inspired vehicles from British car manufacture McLaren. Leading the lineup is a 2019 McLaren Senna (Lot #1393), which is one of only 500 manufactured and 120 units imported to the United States. It was designed as a track-focused, street-legal hypercar and is powered by a mid-mounted V8 engine that delivers 789 horsepower. A 2015 McLaren 650S Le Mans Edition (Lot #1394) is one of 50 produced worldwide with the iconic F1 GTR cues commemorating the 20th anniversary of McLaren’s 1995 Le Mans win. Lot #1395 is a 2016 McLaren 650S Sprint Race Car, a full-spec McLaren factory-built race car powered by a 3.8-liter V8 engine with a 7-speed automatic transmission.

“Our primal desire for speed is something that many car enthusiasts share and Scott Thomas is no different,” said Steve Davis, president of Barrett-Jackson. “The Scott Thomas Collection contains a host of modern engineering marvels combining both elegance and design with raw power and performance. We are proud to present this incredible collection at our 49th Annual Scottsdale Auction, entirely with No Reserve.”

American performance is also included in The Scott Thomas Collection. Topping the list is a 2005 Ford GT VIN 003 (Lot #1396), which was the first publicly available 2005 Ford GT offered. Lot #1397 is one of only 78 produced 2003 Saleen S7s and is one of only four naturally aspirated S7s with the optional Competition Performance upgrade package. The first production 2013 Dodge Viper GTS VIN 001 (Lot #1398) is also a part of the collection. Receiving an entire redesign in 2013, the fifth-generation Dodge Viper features an all-aluminum V10 engine capable of producing 640 horsepower. Lot #1398 was the first Gen V Viper to roll off the assembly line at Chrysler’s Conner Avenue assembly plant in Detroit.

Other coveted vehicles from The Scott Thomas Collection include: