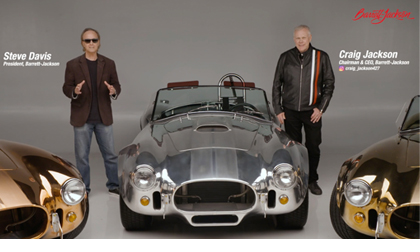 SCOTTSDALE, Ariz.  Dec. 23, 2019 – Barrett-Jackson, The World’s Greatest Collector Car Auctions, is gearing up for unprecedented sales happening on “Fantastic Friday” and “Super Saturday” that will both feature extended dockets of highly coveted collector vehicles during its 49th Annual Scottsdale Auction, January 11-19, 2020, at WestWorld of Scottsdale. To accommodate the impressive quality and volume of Friday and Saturday’s consignments, Barrett-Jackson is extending its prime time selling hours both days, giving bidders and guests the opportunity to witness collector car history as vehicles ‒ including the first production Corvette C8 (Lot #3007) ‒ cross the block later into the evening.

“Our Scottsdale Fantastic Friday and Super Saturday auctions will be nothing short of historic,” said Craig Jackson chairman and CEO of Barrett-Jackson. “We’re experiencing an unprecedented surge in high-quality, highly desirable consignments that will be crossing the block on those two days in particular. To accommodate these incredible vehicles, we’re extending our prime time selling hours on both days, giving our guests and bidders a front row seat to auction history. The auction we’re putting together in Scottsdale further validates why Barrett-Jackson was voted USA Today’s No. 1 Best Attraction for Car Lovers.”

Among the collector vehicles that will star in Barrett-Jackson’s Super Saturday Auction include the largest group of Ford GTs ever assembled for auction sale. Among the 11 Ford GTs crossing the block on Saturday is a 2005 Ford GT VIN 003 (Lot #1396), the lowest-numbered Ford GT ever offered to the public. Expanding on the diverse docket are also some of the finest examples of Resto-Mods and customs in the world, including the reigning Ridler Award winner, “CadMad” (Lot #1419), which will also be auctioned on Saturday. Originally one of 99 Cadillac Eldorado Broughams built in 1959 with a body and interior by Pininfarina, “CadMad” is now a custom work of art that took 10 craftsmen over 4,000 hours to build.

“Missing out on the extended prime time auctions on Friday and Saturday will be tantamount to missing out on collector car auction history,” said Steve Davis, president of Barrett-Jackson. “We’re not only utilizing every square inch of our usual covered areas to display cars, we’re also preparing the Equidome at WestWorld – where our bull riding and bullfighting special events have been held in the past – to accommodate the outpouring of quality consignments. This will be the collector car auction of the year. We’re inviting all of our guests to stay later into the night and celebrate the cavalcade of highly coveted, rare and desirable collector cars crossing the block Friday and Saturday.”