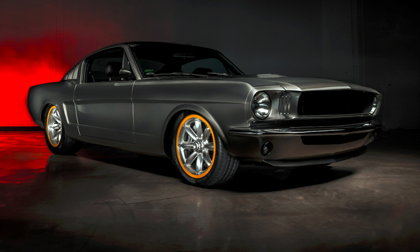 SCOTTSDALE, Ariz. – Dec. 3, 2019 – Barrett-Jackson, The World’s Greatest Collector Car Auctions, will ring in the New Year with professionally-built, award-winning Resto-Mods during the 49th Annual Scottdale Auction January 11-19, 2020. Included with some of the world’s finest classic muscle, supercars and luxury imports, professionally built Resto-Mods like a 1966 Chevrolet Corvette Custom Convertible (Lot #1449) and a 1967 Ford Mustang Eleanor Tribute Edition (Lot #1317.1) are sure to be among  the most desirable vehicles to cross the block.

“Resto-Mods have become the ultimate expression of creativity, design, engineering and performance within the collector car hobby,” said Craig Jackson, chairman and CEO of Barrett-Jackson. “We’re proud to have shined the spotlight on this unique segment of collector cars over a decade ago. Today, these professionally built Resto-Mods represent half of our top 50 sales across all our auctions in 2019. We couldn’t be more thrilled to continue fueling that demand with some of the very best examples in Scottsdale.”

Other Chevrolet-based Resto-Mods include a 1951 Chevrolet 3100 Custom Pickup (Lot #1351) propelled by a 6.2-liter LS3 V8 engine with a rear-mounted 6-speed automatic transmission. It rides on a Sterling Customs frame with a C6 Corvette suspension. A 1957 Chevrolet Bel Air Custom Convertible (Lot #1325) received a three-year restoration by Denny’s Bowtie Restorations. It is adorned with a Parchment Corinthian leather interior and is powered by a supercharged LS3 6.2-liter V8 engine mated to a 4-speed automatic transmission. Lot #1326 is a ground-up restoration of a 1970 Chevrolet Chevelle Custom Convertible from the personal collection of Barrett-Jackson Executive Vice President and General Manager Nick Cardinale. Powered by a supercharged 6.2-liter LSA V8 engine mated to a T56 6-speed manual transmission, this Resto-Mod Chevelle features a Heidts front and independent rear suspension, four Wilwood disc brakes and Vintage Air.

“Resto-Mods emphasize performance while retaining as much of a stock look as possible, turning a classic into a modern performance machine,” said Barrett-Jackson President Steve Davis. “Nearly all these modernized machines are built with the purpose of breathing a second life into the vehicle as a reliable and streetable driver. Our 2020 Scottsdale Auction will feature some of the most fantastic builds from the most well-known names in the industry, all selling at No Reserve.”

Other notable Resto-Mods crossing the block in Scottsdale include: