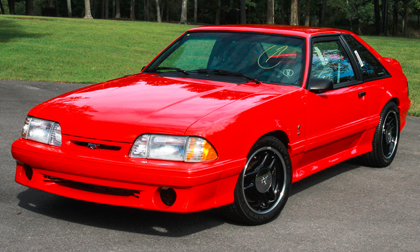 SCOTTSDALE, Ariz. – Nov. 29, 2018 – Barrett-Jackson is rounding up some of the best examples of classic and late-model Ford Mustangs to cross the auction block during its 48th Annual Scottsdale Auction, January 12-20, 2019, at WestWorld of Scottsdale. Included in the impressive herd of Pony cars stampeding into Scottsdale is the Mustang that started it all, the first ʼ65 pre-production hardtop to receive a VIN (preview). Also included in the docket is a ’93 SVT Cobra R (preview), which is an incredibly hard-to-find, low-mileage Fox Body model. Adding some Hollywood horsepower to the auction docket is “Eleanor” (preview), one of the original ’67 custom coupes used in the movie “Gone in 60 Seconds.”

“Scottsdale will be one of our very best events for Ford Mustang enthusiasts during our 48-year history,” said Craig Jackson, chairman and CEO of Barrett-Jackson. “We’re especially excited to have the first Mustang to ever receive a VIN number cross our block at No Reserve. This is a once-in-a-lifetime opportunity for collectors to own an iconic piece of automotive history. All of the Mustangs crossing the block in Scottsdale carry a piece of VIN 002’s DNA and represent the best examples from every generation of Mustang.”

The ’65 VIN 002 (preview) is an important piece of Ford Motor Company history and will cross the Scottsdale Auction block in January at No Reserve. Hand-assembled at the Ford Pilot Plant, this Mustang is credited with starting the Pony car revolution. The Mustang will include two binders containing ownership and condition affidavits from all previous owners, along with photos, statements and signatures, as well as its provenance documentation confirming the entire history of the car and complete restoration.

Another star Mustang making an appearance on the Scottsdale auction block is a ’67 custom coupe known as “Eleanor” (preview). One of the original fastbacks used in the movie “Gone in 60 Seconds,” this Mustang was used in the street scenes in the movie, and comes with a Certificate of Authenticity from Cinema Vehicle Services.

Other classic Ford Mustangs crossing the block in Scottsdale include:

“As an avid Pony car enthusiast, I couldn’t be more excited with the depth of Mustangs we’ll have represented in Scottsdale,” said Steve Davis, president of Barrett-Jackson. “Original, fully restored and customs from virtually every Mustang generation will be a part of our January docket. I’m particularly looking forward to watching as an extremely low-mileage ’93 SVT Cobra R crosses the block. The demand for Fox Body Mustangs have been on the rise among collectors, and this one is sure to capture lots of attention.”

The ’93 SVT Cobra R (preview) was a factory race model and was limited to 107 units. Number 11 of a low-volume production, this Mustang Cobra has only 500 actual miles from being used at special events over the past 25 years and includes all documentation since new. Another rare Fox Body Mustang on the docket is an ‘84 20th Anniversary Mustang GT350 (preview). This low-production Mustang has only 121 actual miles and is completely original, including its Oxford White finish and Canyon Red interior, which is still in the factory plastic wrap.

Additional late-model Mustangs crossing the block in Scottsdale include: