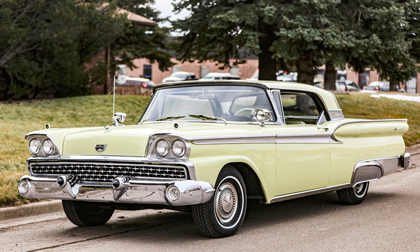 “We’re honored Matt Furukawa entrusted us with selling his incredible collection, all at No Reserve, during our 2020 Scottsdale Auction,” said Craig Jackson, chairman and CEO of Barrett-Jackson. “We bring bidders from around the world to Scottsdale, all seeking to find their perfect collector cars. The vehicles from the Matt Furukawa Collection are the kind of vehicles many buyers would love to have as part of their collections. We couldn’t be more excited to have this incredible offering as part of our Scottsdale Auction docket.”

Highlighting the Matt Furukawa Collection is a duo of coveted, low-mile 2006 Ford GTs. Each is powered by a 550-horsepower, supercharged 5.4-liter V8 engine teamed with a purpose-built 6-speed Ricardo manual transmission. Lot #1353.1 is one of only 343 Heritage Edition Ford GTs produced in 2006 to commemorate Ford Motor Company’s 100-year anniversary. Factory dressed in the Heritage Blue and Epic Orange Gulf Oil livery as a nod to the iconic 1968 and ’69 Le Mans-winning GT40, this 2006 GT has only 2,384 miles. Lot #1353 is finished in a brilliant Mark IV Red with white racing stripes and has only 29 actual miles.

Crossing the block on Saturday, January 18, is a pair of pristine 1970 Plymouth Superbirds. Due to NASCAR homologation rules to qualify as a “stock car,” just 1,920 of these flightless birds were built for public purchase. Finished in Limelight Green, Lot #1352 is one of 458 440ci, 4-barrel, 4-speeds built and is still equipped with its original matching-numbers engine. Lot #1352.1 is a ground-up restored Superbird finished in B5 Blue and is powered by a 440ci V8 mated to a 3-speed automatic transmission.

“Matt Furukawa’s collection of American horsepower is a full stable of late-model high-performance vehicles, many with exceptionally low miles,” said Steve Davis, president of Barrett-Jackson. “It takes a discerning eye to gather such a collection of desirable horsepower in such immaculate condition. I can’t wait to see these pristine collectibles cross the block in Scottsdale.”

Vast amounts of American V8 horsepower is thematic in the Furukawa Collection. With a mere 18 miles on the clock, Lot #1009 is a 2019 Dodge Challenger SRT Hellcat Redeye finished in B5 Blue with a black interior. Powered by a 6.2-liter 797hp supercharged V8 engine paired with an 8-speed automatic transmission, this Redeye claims a 10.8-second quarter-mile out of the box. Arguably one of the most sought after muscle car of the ’60s was a 1969 Chevrolet Camaro Z/28 RS (Lot #1009.1). Powered by DZ 302ci V8 engine paired with a 4-speed manual transmission, this fully restored Camaro is finished in Hugger Orange with black interior.

Other vehicles from the Matt Furukawa Collection include: