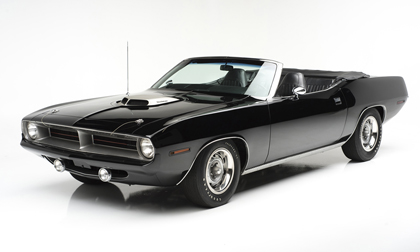 SCOTTSDALE, ARIZ. – Dec. 22. 2016 – Barrett-Jackson, The World’s Greatest Collector Car Auctions®, will feature an extraordinary docket of rare Mopars during the 46th Annual Barrett-Jackson Scottsdale Auction, to be held Jan. 14-22, 2017, at the WestWorld of Scottsdale in Arizona. One of the most rare and collectible among those crossing the Scottsdale auction block is a ’70 Plymouth HEMI ’Cuda (Lot #1392), which is one of only 14 built, has a significant race history and set national records.

“Classic Mopars have become incredibly coveted vehicles over the last decade,” said Craig Jackson, chairman and CEO of Barrett-Jackson. “With huge motors and race inspired aerodynamics, Chrysler blazed new trails in racing. Some of those pioneering Mopars will be among the most anticipated crossing the block and certainly be the crown jewel of any collection.”

Among the most coveted and rare of muscle cars is a ’70 Plymouth HEMI ’Cuda Convertible (Lot #1392), which is only one of 14 built. Enhanced by its color combination of triple black, this ’Cuda has a rich racing pedigree, including national records for ET and mph in NHRA and IHRA, as well as the SS Eliminator title at the 1973 U.S. Nationals in Indy. It was owned by Hall of Famer Steve Bagwell and driven by Hall of Famer Terry Earwood.

Lot #1320, a ’70 Plymouth Superbird, is a rare original that is a well-documented survivor vehicle and only has 14,800 original miles since new. Only built for one model year, this Superbird features the rare factory Y39 Special Order code designation and is one of the best examples of Plymouth’s remarkable street packages. This multiple show award-winning Superbird includes a complete owner history and original artifacts and documents.

“It’s incredibly fitting that these Chrysler vehicles were given the distinction of Mopar, a combination of motor and parts,” said Steve Davis, president of Barrett-Jackson. “The classic models, like the ’70 Superbird that’s crossing the block in Scottsdale, provided the foundation for some remarkable design and performance advancements – both for race cars and street models. Mopar fans and collectors will not want to miss Scottsdale 2017.”

The ’70 Dodge Challenger T/A (Lot #1031) is a great example of a factory T/A with its original 340ci Six Pack V8 engine with factory 4-speed manual transmission. Painted in Go Mango orange with black graphics, this rust-free Challenger was restored in 2008 and is listed in the Challenger T/A Registry and comes with extensive receipts, information and a complete restoration photo album.

Other significant Mopars crossing the 2017 Scottsdale block includes a ’71 Plymouth ’Cuda (Lot #1071). Equipped with a V-code 440ci 6-barrel motor and 4-speed manual transmission, this ’Cuda is painted in Sassy Grass Green and is one of only 108 4-speed V-code ’Cudas built. Also crossing the block is a ’70 Plymouth ’Cuda AAR (Lot #1030), which still carries its factory-original 340ci Six Pack engine and D32 TorqueFlite transmission. It underwent a frame-off, concours-level restoration and is fully documented by Galen Govier.