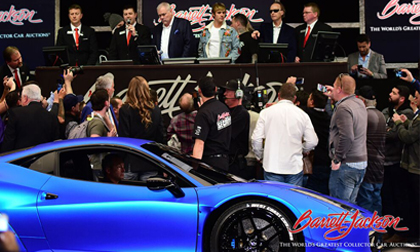 SCOTTSDALE, Ariz. – Jan 23, 2017 – Barrett-Jackson, The World’s Greatest Collector Car Auctions®, kicked off its 46th year by breaking more than 40 vehicle auction sales records (as verified by Hagerty Data) during the 46th Annual Barrett-Jackson Scottsdale Auction, held Jan. 14-22, 2017, at WestWorld of Scottsdale in Arizona. During the automotive lifestyle event, 1,719 vehicles were consigned, the most at one auction in the company’s history, with vehicle sales totaling approximately $100 million (unaudited) at a 99.5-percent sell-through rate. Over 1,800 pieces of automobilia sold for more than $2.5 million (unaudited) bringing the total sales to more than $102 million. Approximately 320,000 people attended this year’s auction, including many of today’s hottest celebrities, professional athletes and entertainment personalities.

“This year’s Scottsdale auction was a tremendous success,” said Craig Jackson, chairman and CEO of Barrett-Jackson. “Despite the rain and colder temperatures, we had a phenomenal turnout, set 40 world auction sales records and sold more than 1,800 pieces of authentic automobilia. This year’s entertainment factor was through the roof. From Rock and Roll Hall of Famer Steven Tyler and Grammy award-winning Justin Bieber, through undefeated pro boxing champion Floyd Mayweather and the most decorated Olympian in history, Michael Phelps, to two-time Masters champion Bubba Watson, there was no shortage of entertainment and full-throttle excitement.”

The Barrett-Jackson Scottsdale auction gave bidders the chance to select from a wide range of American muscle, European classics, exotic sports cars and one-of-a-kind customs. The top cars sold in Scottsdale include:

“Barrett-Jackson Scottsdale has become the most anticipated event of the year as it is the barometer for the hobby,” said Steve Davis, president of Barrett-Jackson. “Barrett-Jackson Collector Car Week, as proclaimed by the city of Scottsdale, is an immersive entertainment experience that offers something every person can enjoy. The World’s Greatest Collector Car Auction was the only place to find the greatest selection of cars, the most passionate enthusiasts, the largest number of charity cars and the biggest displays by top automakers, all inside more than a million square feet of covered space.”

Eight charity vehicles crossed the Scottsdale block this year, including Rock and Roll Hall of Fame inductee and four-time Grammy winner Steven Tyler’s 2012 Hennessey Venom GT Spyder (Lot #3003). Tyler roared onto the stage to help sell his rare Hennessey, which sold for $800,000, with 100 percent of the proceeds benefiting Janie’s Fund.

“Steven Tyler entered the auction arena in true rock and roll style,” said Jackson. “With a grand entrance featuring lights, music and Steven standing in the passenger seat, the crowd was on their feet like we were at one of his concerts. There’s really no place in the world, like Barrett-Jackson, that brings together superstars and super cars.”

To date, Barrett-Jackson has raised over $93 million for local and national charities.

This year’s excitement at Barrett-Jackson continued beyond the auction block and included a variety of automotive and lifestyle activities, including the Coca-Cola Garage and Patio. Other activities included Ford and Chevrolet Ride ’N Drives, Dodge Thrill Rides and complimentary “Behind the Hobby” Collector Car Symposiums.

The first to broadcast a live collector car auction in 1997, Barrett-Jackson has pioneered how enthusiasts access its auctions around the world. Today, 20 years later, Barrett-Jackson is the leading collector car auction on the air. More than 36 hours of live coverage of this year’s Scottsdale Auction was shown on Velocity and Discovery simultaneously in the U.S., Canada, U.K. and Discovery en Español. Barrett-Jackson is also the first to pioneer a second screen experience this year with the new Shell Pennzoil Pioneering Performance Stage.

Consignments are now being accepted for the 15th Annual Barrett-Jackson Palm Beach Auction April 6-8, 2017, at the South Florida Fairgrounds. For information on becoming a bidder, follow the link to www.barrett-jackson.com/bid. Information on available packages and how to be a part of this world-class lifestyle event is available here.