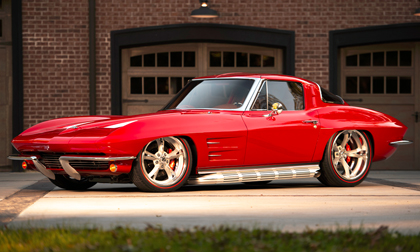 SCOTTSDALE, Ariz. – Dec 6, 2018 – Barrett-Jackson is gearing up for another adrenaline-filled auction with some of the world’s most coveted ’60s to ’70s era custom vehicles during its 48th Annual Scottsdale Auction, January 12-20, 2019, at WestWorld of Scottsdale. Collectors worldwide continue to make well-built custom vehicles a part of their collection, like a ’63 Chevrolet Corvette Split Window Custom Coupe (Lot #1333) built by Jeff Hayes and American Speed Shop. Another hotly anticipated custom is the ’65 “SN65 Mustang” (Lot #1325), which masterfully integrates two unibody cars separated by 40 years of production.

“The golden era of ’60s and ’70s cars produced fantastic canvases for custom builds,” said Craig Jackson, chairman and CEO of Barrett-Jackson. “When these vehicles rolled off the assembly line nearly 50 years ago, they were celebrated for their bold looks and engineering. Today, they’re being used by talented craftsman to bridge the design of the past with technology of today. The vehicles consigned for our Scottsdale Auction are some of the very best examples built by top names to the high standards collectors expect from today’s custom vehicles.”

“The resources available for automotive craftsman to create their ‘rolling art’ are unprecedented,” said Steve Davis, president of Barrett-Jackson. “When contemporary tech, parts and tools are combined with the unbelievable talent of these artisans, classic cars are transformed into timeless masterpieces. For those seeking a true, one-of-one vehicle for their collection, our Scottsdale Auction should already be on their calendar.”

Another sought-after custom will be a ’67 Chevelle (Lot #1447) featured on the 10th season of “Chop Cut Rebuild,” which took a year to build. The car features custom upgrades inside and out, including tucked and shaved bumpers, wheels with red line tires, Nu-Relic power windows, Vintage Air and Audio Shoppe sound system. “Grandma’s Furyous” is a creative take on a ’66 Plymouth Fury Coupe (Lot #986). An original, rust-free body, the car was completely stripped and refinished and upgraded with an 500ci aluminum big block capable of cranking out 600 horsepower.

Additional ’60s and ’70s customs crossing the block in Scottsdale include: