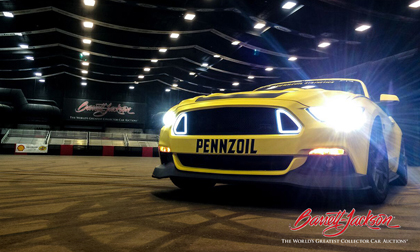 SCOTTSDALE, ARIZ. – Jan. 10, 2017 – Barrett-Jackson, The World’s Greatest Collector Car Auctions®, teamed up with Pennzoil and World Champion drifter and professional “fun-haver” Vaughn Gittin Jr. to film “No Reserve Drifting,” a wild drifting video shot on-site at WestWorld of Scottsdale. “No Reserve Drifting” was released today and can be streamed online at http://www.barrett-jackson.com/Media/Home/Video/198898576.

The video was shown for the first time today during an exclusive media reception for the 46th Annual Barrett-Jackson Scottsdale Auction.

“It was an absolute blast filming ‘No Reserve Drifting’ together with Pennzoil and Vaughn,” said Craig Jackson, chairman and CEO of Barrett-Jackson. “Vaughn’s driving skills are incredibly impressive. It was a real show to watch him navigate, drift and spin through our massive auction site. I’ll admit, though ‒ riding shotgun while he drifted around the Veyron was a little intense. But I can’t think of a better way to drive excitement about this year’s Scottsdale auction than with some high-performance stunt driving from a World Champion drifter.”

The stage for “No Reserve Drifting” was Barrett-Jackson’s long-standing auction site, WestWorld of Scottsdale. Throughout the huge auction site, Gittin is shown piloting his 2017 Monster Energy Nitto Tire Ford Mustang RTR through harrowing hairpin turns and calculated donuts that demonstrate his natural dexterity behind the wheel. Many cameras, including a drone shooting aerial footage, captured what Pennzoil Synthetics and 450 powerfully agile horses can accomplish when shod with Nitto NT555 G2 tires.

“When the very fun crew at Pennzoil called to tell me that Craig Jackson and his team wanted to give me ‒ and one of our brand-new 2017 Ford Mustang RTRs ‒ unrestricted access to get crazy at the Barrett-Jackson auction site in Scottsdale, it did not take much arm-twisting for me to say yes,” said Gittin. “Long story short, I made the massive site ‒ including the one million square feet of tent space they have ‒ my personal playground for a day. It was incredibly fun! And, as if some of the things that I pulled off were not sketchy enough, Craig decided to bring his Bugatti Veyron in for me to use as an obstacle in front of where the auction block was being built. I talked Craig into joining me and sitting shotgun for that portion; I saw him wanting to grab the wheel as we got closer and closer to his car!”

The Ford Mustang RTR Spec 2 piloted by Gittin is available with up to 670 horsepower and features modern aggressive styling and performance upgrades including fully adjustable suspension and is available globally at select Ford dealers. Guests attending the 2017 Barrett-Jackson Scottsdale Auction are encouraged to be on the lookout for Gittin’s “performance art” ‒ the equivalent of 360,000 miles of tracks left behind by the Nitto NT 555 G2 tires.