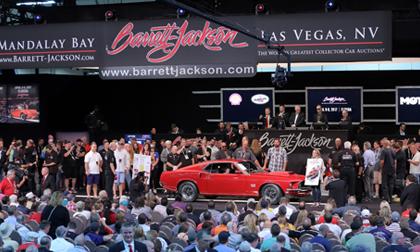 LAS VEGAS – Oct. 16, 2016 – Barrett-Jackson, The World’s Greatest Collector Car Auctions®, featured unprecedented international television coverage and a record number of bidders in Las Vegas during its 9th Annual auction at Mandalay Bay Resort and Casino. After kicking off the event at Drai’s Beachclub and Nightclub for the Opening Night Party, Barrett-Jackson delivered an impressive 99.2-percent sell-through rate with sales totaling more than $32.5 million and $850,000 raised for charity. This year’s Las Vegas automobilia auction was the company’s most successful non-Scottsdale automobilia auction with a total of $777,000, an 8-percent increase over the 2015 Las Vegas auction.

“This Las Vegas auction proved that Barrett-Jackson continues to set the bar for sales, attendance and broadcast coverage among collector car auctions,” said Craig Jackson, chairman and CEO of Barrett-Jackson. “We experienced extraordinary television coverage with 24 hours being broadcast in the U.S. on Discovery and Velocity, as well 24 hours in Canada and 20 hours in the United Kingdom. We’re proud to fuel the collector car hobby by bringing our live auctions into the living rooms of fans around the world.”

The top five vehicles sold during the 2016 Las Vegas auction include:

“It’s been another incredible Las Vegas auction,” said Steve Davis, president of Barrett-Jackson. “Barrett-Jackson is the lone collector car brand that can live up to the excitement only found in the ‘Entertainment Capitol of the World.’ I’m especially proud of the $850,000 our generous bidders donated to five deserving charities.”

The five vehicles that sold for charity during the Las Vegas auction included:

“This year was our 45th Anniversary and we’ve had a lot to celebrate,” said Jackson. “In Scottsdale we set new records at every turn, including the sale of 2017 Acura NSX VIN #001, which sold for $1.2 million for charity. In Palm Beach, we welcomed Hollywood megastar William Shatner on stage to help sell two cars from his collection. At our inaugural Northeast Auction in Connecticut, tickets sold out within hours after gates opened and the vehicle docket closed well in advance due to strong demand. It was the first double sell-out in our company’s 45-year history. It’s only fitting that we top off our 45th Anniversary in Las Vegas with exceptional international TV coverage and sales, making it a truly banner year for our company, as well as our bidders, consignors, sponsors and fans.”

The 46th Barrett-Jackson Scottsdale Auction will be held January 14-22, 2017, at WestWorld of Scottsdale. To consign a vehicle, click here. For more information on becoming a bidder, follow the link to www.Barrett-Jackson.com/Bid.

About The Barrett-Jackson Auction Company
Established in 1971 and headquartered in Scottsdale, Arizona, Barrett-Jackson, The World’sGreatest Collector Car Auctions®, is the leader in collector car auctions and automotive lifestyle events. The company produces auctions in Scottsdale, Arizona; Palm Beach, Florida; at Mohegan Sun in Connecticut, and Las Vegas, Nevada. With broadcast partners Velocity and Discovery Channel, Barrett-Jackson will feature live television coverage in 2016, including broadcasts in over 100 countries internationally. Barrett-Jackson also endorses a one-of-a-kind collector car insurance for collector vehicles and other valued belongings. For more information about Barrett-Jackson, visit http://www.barrett-jackson.com, or call 480-421-6694.