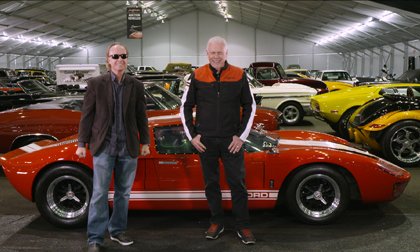 To accommodate the larger docket, Barrett-Jackson will expand its vehicle display space into the WestWorld Equidome south of the auction arena. The new South Showcase will feature over 100 vehicles that are set to cross the block during the extended Fantastic Friday sale.

“This year’s Scottsdale Auction is proving that the collector car market is operating at top speed,” said Craig Jackson, chairman and CEO of Barrett-Jackson. “With the largest publicly consigned No Reserve docket in auction history, we’re encouraging our guests to come early and stay late to enjoy the full Barrett-Jackson experience throughout the week. With nearly 2,000 collector vehicles crossing the auction block, along with a host of thrilling exhibits and displays, we’re giving our guests something they can’t find anywhere else in the world. We’ll make history in Scottsdale, and we’re inviting everyone to be a part of it.”

In addition to the South Showcase, Barrett-Jackson will also host exclusive symposiums at the South Showcase Stage Tuesday through Saturday featuring celebrity panelists discussing youth automotive culture, stunts in the “Fast and Furious” movie franchise, and women in the automotive industry. The Scottsdale Auction will feature more than 330 sponsor and exhibitor displays filled with the latest automotive and luxury goods, along with over 100 food vendors.

“The heartbeat of the Barrett-Jackson experience is the quality and diversity of collector cars that cross our block,” said Steve Davis, president of Barrett-Jackson. “We’re delivering that experience in spades this year with the largest and most diverse docket during Barrett-Jackson Collector Car Auction Week. Our Scottsdale Auction will demonstrate why Barrett-Jackson was voted as USA Today’s Best Attraction for Car Lovers in 2019.”

Highlighting the 2020 Scottsdale Auction’s extended prime time hours on Friday and Saturday are nine prestigious collections, 11 coveted Ford GTs, a smattering of celebrity-owned vehicles and the world’s largest gathering of professionally built Resto-Mods, all selling at No Reserve. Guests wishing to attend the event after 5 p.m. Wednesday, January 15, through Saturday, January 18, can get exclusive prime-time ticket pricing online and at the gate.

The 2020 Scottsdale Auction Docket is available to view online. To receive more information on becoming a bidder, or purchase tickets for the 2020 Scottsdale auction or consign for future 2020 auctions, visit www.Barrett-Jackson.com.