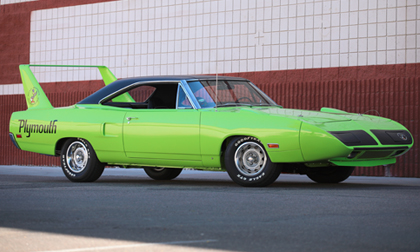 SCOTTSDALE, Ariz.  Dec. 17, 2019 – Barrett-Jackson, The World’s Greatest Collector Car Auctions, is continuing its decades-long tradition of consigning the very best classic American muscle collector cars for its 49th Annual Scottsdale Auction, January 11-19, 2020, at WestWorld of Scottsdale. One of the finest No Reserve offerings in Scottsdale history, the 2020 docket will feature rare, prototype, restored and original American muscle cars that dominated the tracks and streets throughout the 1960s and 1970s.

“Classic American muscle cars have been at the center of our auctions for decades,” said Craig Jackson chairman and CEO of Barrett-Jackson. “During the golden age of American muscle, these cars raced their way into our hearts, forever weaving themselves into our culture. The desire and collectability of these classic muscle cars continues to thrive today, especially for limited-production and professionally restored examples. We’ll have an incredible selection of these rare classic American muscle cars that you’ll only be able to find at Barrett-Jackson Scottsdale.”

This V-code Superbird underwent a complete, nut-and-bolt professional restoration and is documented by its Broadcast Sheet with a matching-numbers engine and transmission. One of a limited number of Superbirds produced with a 440 Six-Barrel engine and a 4-speed manual transmission.

An extremely rare find, a Chevrolet Camaro ZL1 COPO (Lot #1409), will be crossing the block with No Reserve. This example is dressed in Hugger Orange and is #59 of 69 built for the 1969 model year. This original, matching-numbers Camaro comes with extensive documentation and is the only ZL1 ever ordered with an NC8 chambered exhaust. Lot #1366 is a 1966 Ford Fairlane 500 GT-X prototype built to introduce the new Fairlane design for the 1966 model year. The engine is entirely stock and retains all its original and period-correct parts. Prototype parts unique to this Fairlane carry an “XE” experimental part number marking.

“For 30 years now, Barrett-Jackson has consigned the absolute best examples in this collector car genre. Our 2020 Scottsdale Auction will be no exception,” said Steve Davis, president of Barrett-Jackson. “Like blue jeans and apple pie, classic American muscle cars are a part of our culture. With massive V8 engines placed inside lightweight frames, muscle cars went against the cultural norm and led the revolution that turned cars from everyday appliances into performance marvels.

This 1969 Ford Mustang Boss 429 (Lot #1391) is a Billups-restored, matching numbers, with only 21,000 original miles. Multiple award winner including a gold in the Heritage Class at the Mid-America Concours.

Sold in limited numbers to the public as a result of NASCAR’s homologation requirements, Lot #1370.1 is a V-code 1970 Plymouth Superbird finished in Limelight Green with a black interior. This flightless bird one of a limited number of Superbirds produced with a 440 Six-Barrel engine and a 4-speed manual transmission and has 49,000 original miles. Lot #1369 is a Candy Apple Red 1969 Ford Mustang Boss 429 that is a multiple award recipient. It was expertly restored to its original condition and retains the original 429ci V8 engine. One of 503 built by Chrysler, a 1969 Dodge Daytona (Lot #1369.1) crossing the block was built to dominate the NASCAR circuit. It has been meticulously restored, retains all its original body panels and is powered by its matching-numbers 440ci V8 engine and 3-speed automatic transmission.

Additional American muscle cars set to cross the Scottsdale Auction block, all at No Reserve, include: