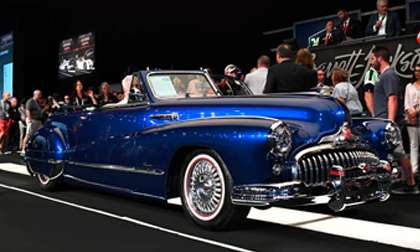 Barrett-Jackson’s Palm Beach Auction Shows Resto-Mods Are In High Demand, Raises Over Half A Million Dollars for Charity During the Company’s Largest 3-Day Florida Event

PALM BEACH, Fla. – April 15, 2019 – Barrett-Jackson, The World’s Greatest Collector Car Auctions, was once again the hub of the collector car hobby during the 17th Annual Palm Beach Auction, April 11-13, 2019. In total, 632 vehicles sold for over $30.18 million with a 98.9 percent sell-through-rate, while 258 pieces of automobilia brought in nearly $500,000, and $550,000 was raised through the sale of three charity vehicles, bringing the total auction sales to more than $31.2 million. This marks the company’s largest 3-day Palm Beach Auction to date with a record number of collector vehicles, nearly 1,500 bidders and strong attendance. Results show that Resto-Mods continue to be in high demand while supercars command record hammer prices.

“This year’s Palm Beach Auction was extraordinary, fueled by the momentum we ignited in Scottsdale,” said Craig Jackson, Chairman and CEO of Barrett-Jackson. “The atmosphere on Super Saturday in Palm Beach felt like it did back in Scottsdale, with excitement fueled in part by the sale of dozens of world-class Resto-Mods. We also enjoyed several inspiring moments throughout our largest three-day Florida auction, including the sale of three vehicles that raised $550,000 for charity. We set a land-speed record in Scottsdale and turned around again and did it in Palm Beach. Our 17th Annual Barrett-Jackson Auction was one for the history books.”

Palm Beach also continued the trend of strong demand for 1980s and 1990s performance cars that have been a rising segment due to the increased presence of Gen-X and millennial buyers. Among the top selling 1980s and 1990s cars that crossed the block in Palm Beach were:

“Barrett-Jackson is the only auction to offer such an eclectic and exciting mix of collectible vehicles,” said Steve Davis, president of Barrett-Jackson. “From a re-creation of the Ford LTD from the film ‘National Lampoon’s Vacation’ (Lot #375) to a world-class 1947 Buick Super 8 Resto-Mod (Lot #735), the diversity of our dockets appeals to veteran collectors, as well as younger buyers. This rising generation of collectors has been watching our auctions on television, igniting a new wave of passion for this incredible hobby. We look forward to adding to our momentum again during our Northeast Auction at Mohegan Sun this June.”

Barrett-Jackson raised $550,000 for charity during the Palm Beach Auction with the sale of three charity vehicles. On Friday, General Motors announced the final production seventh-generation (C7) Chevrolet Corvette will be auctioned at the Barrett-Jackson Northeast Auction with proceeds benefiting the Stephen Siller Tunnel to Towers Foundation. To date, Barrett-Jackson has raised over $115 million for charity. The vehicles sold in Palm Beach to benefit charity included:

Barrett-Jackson’s Automobilia Auction featured over 258 authentic pieces, including the final segment of the William K. Haines Collection. Authentic vintage gas pumps were among the top sellers, led by a 1950’s Dog N Suds Animated Neon Porcelain Drive-In Sign (Lot #5998) that sold for $19,550, which was also the top-selling automobilia piece in Palm Beach.

The top five automobilia items sold during the Palm Beach Auction include: