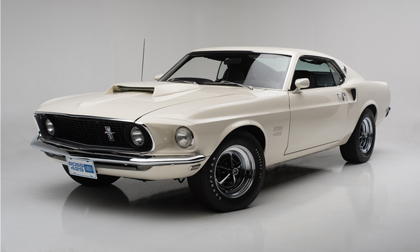 “After a Boss 429 ended up as the top seller at our 2016 Palm Beach auction, I’m excited to have another fine example among the great lineup of Fords this year,” said Craig Jackson, chairman and CEO of Barrett-Jackson. “Not only do we have many historic Fords crossing our auction block in Florida, but Ford is also bringing their all-new 2018 Ford Mustang and Expedition to showcase in their display.”

A ’69 Ford Mustang Boss 429 (preview) also known as known as KK #1717 is one of 271 cars made in Wimbledon White and came well-equipped from the factory. Options on this extremely rare Boss Mustang include a Traction-Lok differential, 4-speed close-ratio transmission, power front disc brakes, deluxe interior, functional front spoiler and completion suspension. It features original matching-numbers engine and transmission, which are documented with a Marti Report. The engine received a full rebuild, completed in August 2016, by a Boss 429 specialist in Scottsdale, Arizona, with the entire process being photo-documented.

“We’re proud to bring some of the best in Ford design and performance to our 15th Annual Palm Beach Auction,” said Steve Davis, president of Barrett-Jackson. “Whether a custom Fastback Mustang or a vintage Woody Wagon, our docket of Ford-powered vehicles represent an incredible part of American automotive history and will make excellent additions to any collection.”

Classic Ford Mustangs crossing the block in Palm Beach include a ’67 Ford Mustang Fastback (preview), which features thousands of hours of custom work inside and out. It is powered by a 351ci Windsor engine that cranks out 450 horsepower and is mated to a 6-speed manual transmission. The interior of this custom Mustang Fastback features tan, glove leather bucket seats, door panels and steering wheel. Another custom Ford is a ’68 Ford Mustang Custom Fastback (preview),powered by a 428/335ci Cobra Jet V8 engine and 4-speed Toploader manual transmission with Hurst shifter. Its exterior features include 17-inch aluminum wheels, GT-500 badging, billet grille and fuel filler cap, halogen high-intensity driving lights and Cougar sequential taillights.

Additional Ford-powered vehicles include a ’47 Ford Custom Woody Wagon (preview) known as “Kahuna.” It features all-original Ford steel and has a 3-inch chop-top built by Doug Carr at Woodn’ Carr. Also headed to Palm Beach is a ’57 Ford Thunderbird “E” Convertible (preview) that has undergone a frame-off restoration. It is loaded with top equipment, including Kelsey Hayes wire wheels, and is powered by a 312ci V8 with an automatic transmission.