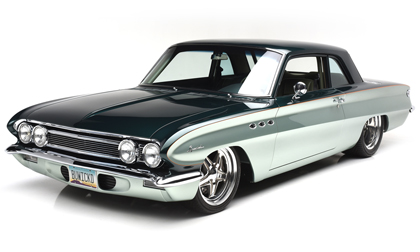 SCOTTSDALE, ARIZ. – Dec. 29, 2016 – Barrett-Jackson is offering exclusively through its showroom one of the most elegant and famous custom cars in the world, the 1962 Buick dubbed Bu’Wicked, owned by collectors Ted and Sue Richardson. Consigned for sale to Craig Jackson’s team in Scottsdale, the big-block Buick-powered Resto-Mod was the star of the show car circuit and Sony’s “Gran Turismo 4” video game.

“Barrett-Jackson was the first to provide an international platform for high-end custom cars and Resto-Mods,” said Craig Jackson, chairman and CEO of Barrett-Jackson. “Cars by masters like Butler, Foose, Coddington and Trepanier deserve as much recognition as those turned out by European coachbuilders. Through our auctions, showroom and TV shows, we’ve elevated this art form to an entirely new level. The rolling sculpture named Bu’Wicked is among the greatest bespoke automotive works of our time.”

Buick enthusiasts Ted and Sue Richardson selected a 1962 Buick Special, which was Motor Trend magazine’s 1962 Car of the Year, as the basis of their project.

“With its deeply sculpted flanks and economical V6 engine, the early Special wasn’t the stuff of hot-rodders’ dreams,” said Showroom Division Manager Jeff Catlin. “But after five and a half decades, this Buick is now seen as a clean palette with its unique, compact form. Its scarcity today sets it apart from more common Buick muscle cars of the late ’60s and early ’70s.”

Starting with an illustration by Justin Milburn, the Richardsons hired the late Ryan Butler of Bill McGlaughlin’s Hot Rod Fabrication to construct Bu’Wicked. Among other superb custom features, the car boasts a full Art Morrison tube chassis and Heidts coilover front suspension, as well as a supercharged Buick 455 with aluminum heads, a custom intake manifold, headers and exhaust system. The engine sends 700 horsepower and 750 ft/lbs of torque to the Richmond 6-speed stick. Inside, the austere interior was transformed to match the two-tone body with tasteful Lambo Orange pinstriping.

Shortly after its debut, the car graced the cover of Custom Rodder magazine and was featured in Popular Hot Rodding. Bu’Wicked reached immortality as a playable car in Sony’s “Gran Turismo 4” game for the PlayStation 2.

About Barrett-Jackson
Established in 1971 and headquartered in Scottsdale, Arizona, Barrett-Jackson is the leader in collector car and automotive lifestyle, which include auctions, VIP experiences, a private showroom and authentic automobilia. With an unprecedented expert staff having over 130 years of combined industry experience in the automotive field, Barrett-Jackson is a proven brand in the industry for excellence in all things automotive-related. The company produces The World’s Greatest Collector Car Auctions® in Scottsdale, Arizona; Palm Beach, Florida; at Mohegan Sun in Connecticut, and Las Vegas, Nevada. With broadcast partners Velocity and Discovery Channel, Barrett-Jackson will feature extensive live television coverage in 2017, including broadcasts in over 100 countries internationally. Barrett-Jackson also endorses a one-of-a-kind collector car insurance for collector vehicles and other valued belongings. For more information about Barrett-Jackson, visit http://www.barrett-jackson.com or call 480-421-6694.