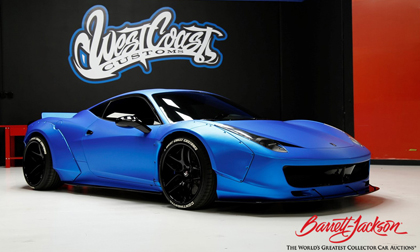 “Our Barrett-Jackson auctions are far more than a gathering of car collectors,” said Craig Jackson, chairman and CEO of Barrett-Jackson. “Over the years, celebrities, business leaders and sports icons alike have flocked to our auctions. No other collector car auction delivers the kind of high-octane excitement where celebrity sightings are as common as the rare collector cars that cross our block.”

“We loved working with Justin to make his Ferrari a true one-of-one custom supercar,” said Ryan Friedlinghaus, CEO of West Coast Customs. “Despite his hectic schedule, he was heavily involved in the customization process and really put his signature style on this Ferrari. I can’t think of a better place than Barrett-Jackson to give someone else the chance to love it as much as he did.”