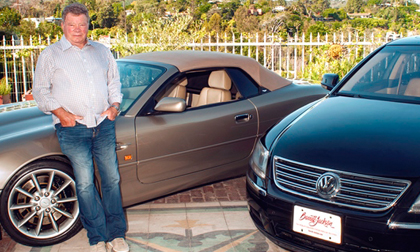 PALM BEACH, Fla. – March 24, 2016 – Barrett-Jackson, The World’s Greatest Collector Car Auctions®, will sell two cars from the personal collection of Hollywood megastar William Shatner during the company’s 14th Annual Palm Beach Auction from April 8-10, 2016, at the South Florida Fairgrounds. Shatner, best known as the original Captain James T. Kirk in the “Star Trek” TV and movie franchise, is selling a low-mileage 2002 Aston Martin DB7 Volante (Lot #89.1) and a 2004 Volkswagen Phaeton (Lot #89.2), both of which the star will autograph for the new owners during the auction.

“Our Palm Beach auction has been host to many fantastic celebrities over the past 14 years,” said Craig Jackson, chairman and CEO of Barrett-Jackson. “It’s an honor to add Mr. Shatner to our list of film and music legends who trust Barrett-Jackson with the auction of their vehicles. Having a car that belonged to the original ‘Captain Kirk’ will be a great story to tell for the new owners.”

Shatner has long been a fan of everything automotive. Shortly after being cast as Captain Kirk in “Star Trek” in 1966, Shatner splurged on a Corvette Stingray. He has driven across the country numerous times in trucks, cars and even motorcycles. Just last year he drove from Chicago to Los Angeles along Route 66 for charity.

“Mechanical things have always fascinated me,” said Shatner. “The sound of the exhaust, the ticking of the engine, the sleekness of the design have intrigued and entranced me. I look for cars like the ones I am selling: this great VW Phaeton – one of the most advanced cars in the world at its time – and this Aston Martin DB7, which is a jewel of design.

“Barrett-Jackson is one of the great names in car auctions. I have two wonderful cars that I am sending to them. They are like my kids, but I know they will get great care and I will be there for the adoption process. I am looking forward to it.”

For more information on becoming a bidder, follow the link to http://www.Barrett-Jackson.com/Bidder/Home.

About The Barrett-Jackson Auction Company
Established in 1971 and headquartered in Scottsdale, Arizona, Barrett-Jackson, The World’s Greatest Collector Car Auctions®, is the leader in collector car auctions and automotive lifestyle events. The company produces auctions in Scottsdale, Arizona; Palm Beach, Florida; at Mohegan Sun in Connecticut, and Las Vegas, Nevada. With broadcast partners, Velocity and Discovery Channel, Barrett-Jackson will feature live television coverage in 2016, including broadcasts in over 100 countries internationally.Barrett-Jackson also endorses a one-of-a-kind collector car insurance for collector vehicles and other valued belongings. For more information about Barrett-Jackson, visit http://www.barrett-jackson.com,or call 480-421-6694.