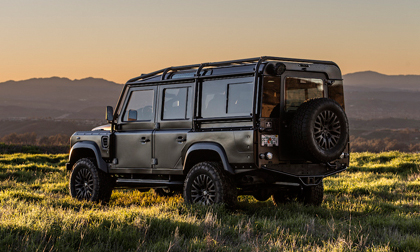 LAS VEGAS – OCT. 30, 2017 – East Coast Defender (E.C.D.) has teamed up with Warn Industries to debut their hand-crafted, custom Land Rover Defenders at this year’s SEMA Show, which will be held Oct. 31 – Nov. 3, 2017, in the Las Vegas Convention Center. E.C.D. will display “Project Beast” in the Warn Industries booth (#31059) located in the Upper South Hall. The hand-crafted, custom re-built Land Rover Defender 110 features a 430 horsepower Chevrolet LS3 engine with custom features and appointments throughout.

“We’re looking forward to teaming up with Warn Industries for our first appearance at the SEMA Show,” said Scott Wallace, East Coast Defender Co-Owner. “We’ve attracted quite a bit of attention since we first started building our custom Defenders, and now Range Rover Classics. The SEMA Show has an incredible reputation for hosting the world’s best in automotive design and engineering. We’re looking forward to the Show and expect it to be a great platform to showcase our team’s ability to build and design world-class design Defenders, like Project Beast.”

Project Beast is an elite off-road SUV, hand-built by East Coast Defender at the company’s headquarters and manufacturing facility, the Rover Dome in Kissimmee, Fla. It features a Kahn wide-body kit that has been seamlessly integrated into the Defender to reach a new level of aesthetic brilliance. Under the hood is a powerful and agile LS3 engine that delivers incredible performance. The hand-built SUV, which was completed in 2016, started life as a 1985 Land Rover Defender and features custom appointments throughout, including a Warn winch.

“We’ve worked with the East Coast Defender team on several projects and have come to respect their workmanship on their custom Defenders,” said Jim Randall, Senior Manager and Marketing Strategist at Warn Industries. “We’re looking forward to having ‘Project Beast’ as a part of our SEMA exhibit this year. It will be a great complement to our other display vehicles, which includes a modified 2018 Toyota Tundra that’s outfitted with Overlanding gear.”

“What we’ve created with our custom Defender and Range Rover Classics, fits into a highly niche market,” said Elliot Humble, East Coast Defender Co-owner. “We strip each vehicle down to its frame and complete it according to our client’s exact specifications. It’s truly a premium design and build process unlike anything we see in the market. Since opening our doors we’ve been able to refine our build processes and team up with incredible supply partners, like Warn, who share our standards of excellence in each product they build. We’re looking forward to sharing our first SEMA experience with them.”

To see “Project Beast” and talk with an East Coast Defender representative about their custom, hand-crafted Defenders and Range Rover Classics, visit the Warn Industries booth (#31059) located in the Upper South Hall.

About East Coast Defender
Headquartered in Kissimmee, Florida, East Coast Defender (E.C.D.) is an award-winning builder of premium Land Rover Defenders and Range Rover Classics. The company was founded in 2013 by three self-prescribed “British petrol heads,” brothers Tom and Elliot Humble, and Scott Wallace. Today, E.C.D.is known for its commitment to perfection, dedication to build quality and ability to maintain the heritage of their vehicles while bringing them up to 21st Century luxury. E.C.D. is home to 36 full-time employees in its 25,000 square-foot manufacturing facility in Florida, known as the Rover Dome, and its West Coast Design Studio in Malibu, California. www.EastCoastDefender.com