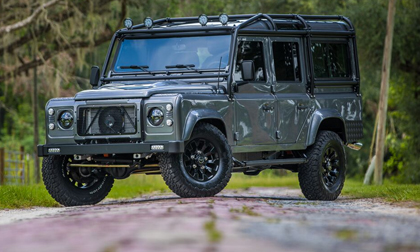 KISSIMMEE, FLA. – Aug. 24, 2017– East Coast Defender has breathed new life into another Defender 110 with its latest award-winning build, “Project Kingsman”. The luxury SUV, which was designed and built at the Rover Dome in Kissimmee, Florida, was completed earlier this month and has been rebuilt from the ground up and features a brand new, galvanized chassis.

“The original steel frames of the Defenders were true workhorses and offered the ultimate in off-road, go-anywhere, do-anything driving,” said Scott Wallace, East Coast Defender Co-Owner. “Our team has been able to improve their durability using an upgraded, galvanized chassis. ‘Project Kingsman’ is built on a new chassis that has been dipped in molten protective zinc coating. This holds off corrosion and increases the life of the frame. It also keeps the nostalgia of the vehicle intact, while bringing it up to today’s highest performance standards.”

“Project Kingsman” showcases the classy and refined look of the Defender, yet has been rebuilt to be more powerful and agile than its original OEM build. It’s built on a new galvanized chassis, which will prevent the frame from rusting and increase the Defender’s longevity and durability. During the rebuild no nut or bolt was left untouched. It has also been upfitted with the latest technology and performance equipment.

“Our Defenders not only offer incomparable workmanship, but deliver on reliability as well,” said Tom Humble, East Coast Defender Co-owner. “By stripping each Defender down to its frame, we’re not only able to customize and upgrade each component as its rebuilt, but incorporate the latest technology and processes to build a stronger, more robust Defender. We not only offer luxury and performance with each build, but reliability and peace of mind for our clients, as well.”

Work on “Project Kingsman” began July 2016 and was completed on August 15, 2017. “The high level of attention to detail on each of our Defenders is simply unmatched,” said Elliot Humble, East Coast Defender Co-owner. “From the initial phases of planning the vehicle with the client, through the build and delivery, our team offers a remarkable buying and owning experience. I believe it speaks volumes about why East Coast Defender vehicles are so popular and continue to increase in value over time.”