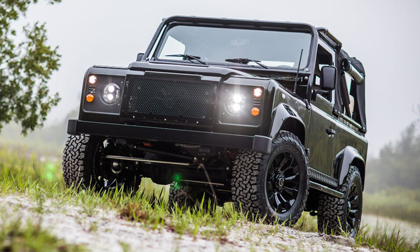 KISSIMMEE, FLA. – June 23, 2017 – East Coast Defender has once again set the standard for custom Defender builds with its latest project, “Honey Badger,” a handcrafted Defender 90 featuring a powerful LS3 V-8 engine with a new manual transmission option. Built to withstand rugged, off-road abuse, the Honey Badger’s six-speed manual transmission is the most capable available and reflects the high-quality craftsmanship and engineering prowess of the ECD team.

“Our team has earned a reputation for pushing the envelope with each custom Defender that rolls out of The Rover Dome,” said Scott Wallace, East Coast Defender Co-Owner. “The latest project, ‘Honey Badger’ is a testament to our commitment to building the most capable civilian SUV’s in the world. This new drivetrain option mated to a powerful LS3 V-8, makes it as competent on the rocks of Moab as it is the streets of Miami.”

Each East Coast Defender SUV is a pure, handcrafted vehicle. Like its namesake implies, this “Honey Badger” is an aggressive vehicle that’s incredibly tough and capable of taking on the harshest terrain.

“Land Rover initially offered theV-8 Defender with a four-speed manual transmission,” said Tom Humble, East Coast Defender Co-owner. “The ‘Honey Badger’ commission was particularly exciting as it gave us a chance to build a D90 with a six-speed manual transmission hooked to a V-8, which gives the SUV some real bite.This is the ultimate salute to the origins of the Defender, but with a very contemporary edge.”

Each SUV is purpose-built to a client’s needs and specifications. This is the second Defender commissioned for this particular client, which speaks volumes about the design process and quality.

“The beauty of a manual transmission is the control that it gives a driver when navigating really difficult terrain,” said Elliot Humble, East Coast Defender Co-owner. “Serious off roaders want the ability to slowly work an SUV over rocks and loose gravel. Coupling the massive torque of the 6.2-liter V-8 to the six-speed manual will give the owner of Honey Badger the most flexible and engaging SUV possible for tough overland treks.”