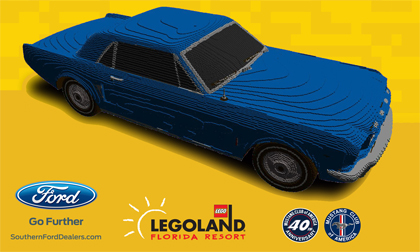 “We’re delighted to show off our version of an American classic during MCA’s 40th anniversary celebration,” said Chloé Boehm, public relations executive at LEGOLAND® Florida Resort. “We can’t think of a more perfect place to reintroduce the car that redefined cool in a fun, creative way.”

Partnering with long-time sponsor Southern Ford Dealers, the resort wanted to build a life-size Ford vehicle that would resonate with guests of all ages. Created with thousands of colorful LEGO® bricks by a team of veteran Master Model Builders, the stunning model re-creates the first Ford Mustang, which debuted at the New York World’s Fair on April 17, 1964.

“It’s an honor to partner with LEGOLAND® Florida Resort to unveil the ‘1964½’ LEGO® Mustang over Labor Day weekend,” said Jeff Mays, president, Mustang Club of America. “The Ford Mustang and LEGO® toys are classic American icons that appeal to enthusiasts of all ages. We look forward to a fun-filled weekend and helping the resort kick off the LEGO® Mustang’s publicity tour at the MCA 40th anniversary celebration.”

Towed in a see-through trailer decorated with colorful LEGO graphics, the model Mustang will participate in MCA’s Mustang Parade at Indianapolis Motor Speedway on Friday, Sept. 2, an event that also will feature Mustangs and MCA clubs from around the globe in an attempt to break the record for the world’s longest Ford Mustang parade.

After its initial appearance in Indianapolis, the LEGO® Mustang will make several stops around the country before arriving at the popular, kid-sized Ford Driving School attraction at LEGOLAND® Florida Resort, where it will remain on permanent display.

For more information about the LEGO® Mustang, visit the resort’s official blog at http://www.llfblog.com and follow its progress through social media with hashtag #BrickPony.

About LEGOLAND® Florida Resort
Built for kids 2-12, LEGOLAND® Florida Resort is a multi-day vacation destination in Winter Haven, Fla., that includes a 150-acre theme park with more than 50 rides, shows and attractions, and a separate water park. Opening in 2017 is LEGO® NINJAGO® World, an immersive land with a groundbreaking, interactive ride inspired by the popular LEGO toy series and companion TV show, and LEGOLAND Beach Retreat, a lakefront resort with 83 themed bungalows offering 166 separate accommodations. LEGOLAND Hotel, located just steps from the theme park entrance, features 152 rooms and suites, each with its own LEGO theme and some with beautiful views of Lake Eloise. For more information, visit http://LEGOLAND.com/florida.

About the Mustang Club of America
The Mustang Club of America is a nonprofit organization dedicated to the preservation, care, history and enjoyment of all model years of Mustang, Shelby, Boss, Saleen, Roush, SVT Cobra, Steeda and McLaren. Membership includes enthusiasts throughout the United States, Canada and worldwide, and more than 190 regional clubs. For more information, visit http://www.mustang.org