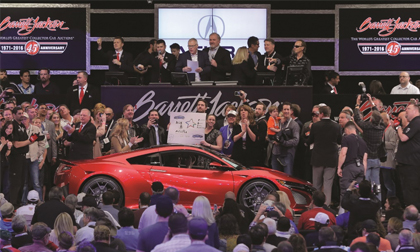 Barrett-Jackson has become a staple and a point of pride for the City of Scottsdale and its residents over the 46 years since its inception in 1971. Bringing both national and international attention to the city, in 2016 the annual event brought in more than 350,000 in attendance, with bidders from all 50 states and eight foreign countries. Having created a positive economic impact and raising over $91 million for local and national charities to date, the auction has become an important tradition for the City of Scottsdale and its residents.

“It’s incredible to think that what began as a small auction in a hotel parking lot in Scottsdale has grown into an automotive lifestyle event that is known the world over,” said Craig Jackson, chairman and CEO of Barrett-Jackson. “While it’s exciting for us to hold auctions across the United States, the event in our hometown of Scottsdale always holds special meaning. We are honored to receive Mayor Lane’s recognition for our contribution to the community.”

Barrett-Jackson’s 46th annual Scottsdale Auction will be held at WestWorld of Scottsdale, Jan. 14-22, 2017. To kick off the nine-day celebration, Barrett-Jackson will host Coca-Cola Family Value Day on Saturday, Jan. 14, with free admission for children under 12. The Automobilia Auction will begin on Saturday, Jan. 14; the invitation-only Opening Night Gala will be held on Sunday, Jan. 15; and the Collector Car Auction will begin on Monday, January 16. The week continues beyond the auction block with a variety of automotive and lifestyle activities, including the Coca-Cola Garage and Patio, Ford and Chevrolet Ride ’N Drives, Dodge Thrill Rides, complimentary “Behind the Hobby” Collector Car Symposiums, Arena Polo matches, an Arabian Horse Exhibition, Indian Motorcycle Demo Rides, hundreds of exhibitor and sponsor displays, and – new this year – a DIY Pavilion and the Shell Pennzoil Pioneering Performance Stage, where visitors can get in-depth looks at various aspects of the collector car world.

For a full schedule of events or more information on tickets and how to become a bidder, visit Barrett-Jackson.com or call 480-421-6694.

About The Barrett-Jackson Auction Company
Established in 1971 and headquartered in Scottsdale, Arizona, Barrett-Jackson, The World’s Greatest Collector Car Auctions®, is the leader in collector car auctions and automotive lifestyle events. The company produces auctions in Scottsdale, Arizona; Palm Beach, Florida; at Mohegan Sun in Connecticut, and Las Vegas, Nevada. With broadcast partners, Velocity and Discovery Channel, Barrett-Jackson will feature live television coverage in 2017, including broadcasts in over 100 countries internationally. Barrett-Jackson also endorses a one-of-a-kind collector car insurance for collector vehicles and other valued belongings. For more information about Barrett-Jackson, visit http://www.barrett-jackson.com, or call 480-421-6694.